It's been a while since we heard anything about the 'Google Barge'. Back in February, we reported that authorities had demanded its removal from San Francisco Bay as it contravened local laws regarding the types of vessels and structures that are permitted in the Bay.

It was later towed from San Francisco to Stockton, where it remains, although according to the port director, Richard Aschieris, there has been no further development on it since its relocation.

But as the Portland Press Herald reports, Google's second barge, located in Portland harbour, has reached the end of its journey with the company. Google said in November that the barges were intended to provide "an interactive space where people can learn about new technology". When completed, the Portland barge was destined to be towed to New York to serve as a floating showroom for the company's most exciting technologies, such as Google Glass. 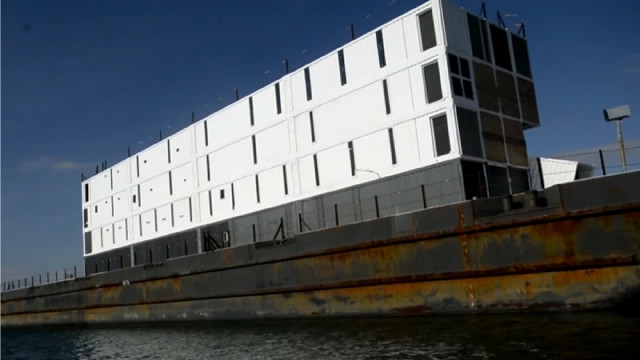 Those plans have now been abandoned. Cianbro Corp. was originally intended to refit the interior of the barge in Portland, but very little work was ever carried out on it. The structure of shipping containers on top of the vessel - assembled to create a multi-story building - will now be dismantled and scrapped, while the barge itself has been sold off to an 'international barging company', and will soon leave Portland for its new home.

It is not yet clear exactly what Google has in store for the barge that was previously in San Francisco. However, it is owned by the same company - By And Large LLC - that has now sold the Portland barge, and given the lack of development work since its move to Stockton, it seems likely that it will suffer a similar fate.

As far back as December of last year, Google was said to have put the barge project 'on hiatus'.

Source: Portland Press Herald via The Next Web | image via Digital Trends