It's been close to a month since I started using the Google Pixel XL and, for the most part, it's been a good experience. Before the announcement of the Pixel, I was a bit hyped on the idea of owning a Google smartphone as it would be my first since the Nexus 5. But as the time drew near and more leaks started to amass, I slowly grew disinterested. 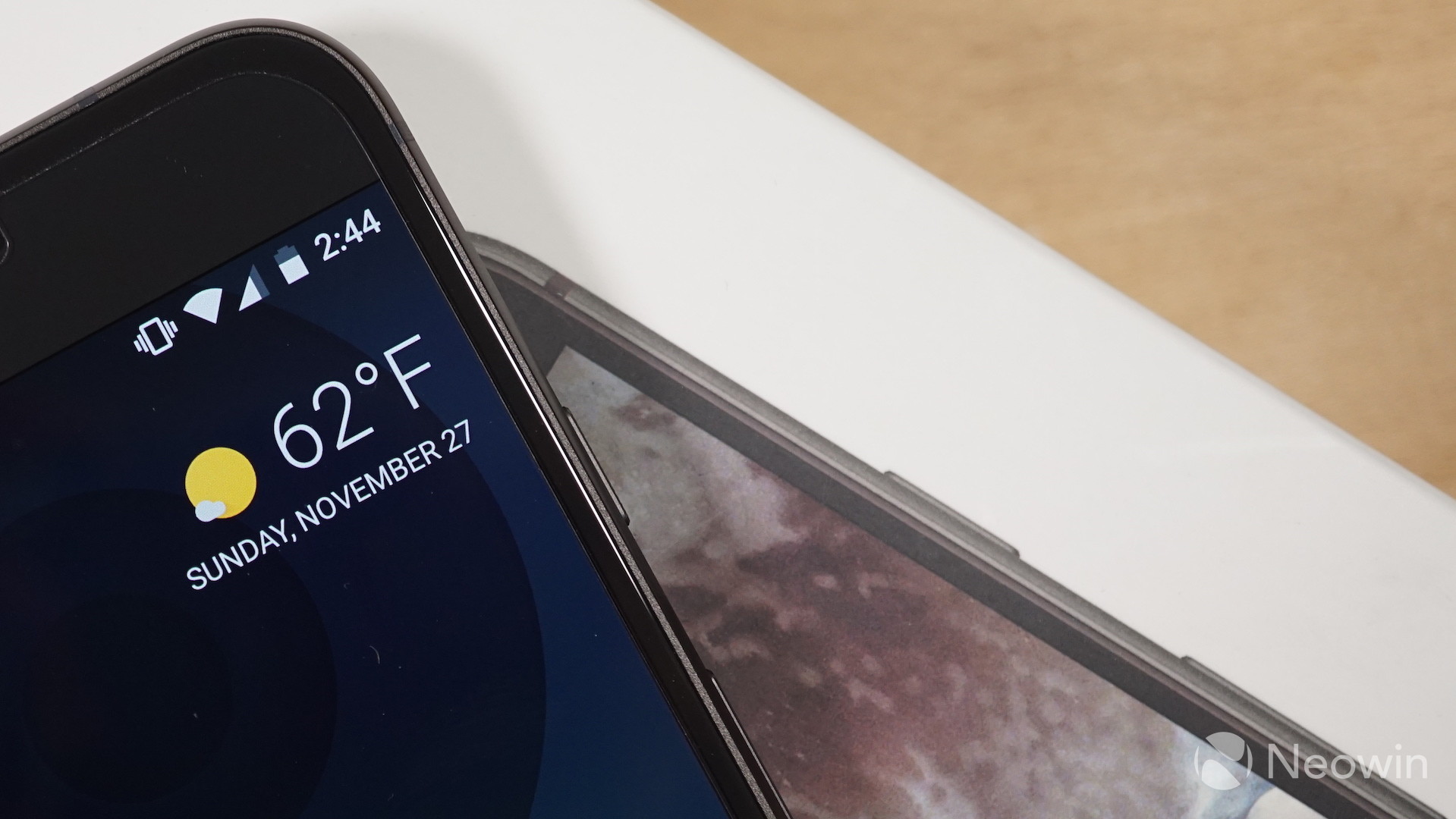 During October, Google announced its "first" official handset, the Pixel and Pixel XL. As the company went through its blasé presentation, it struck home that the Pixels weren't all that interesting - the hype had subsided, at least for myself, and I passed on pre-ordering. After a few weeks of reading reviews, and hearing from colleagues and friends, the once derailed hype train was back on the tracks, running at full speed. I decided to bite the bullet and ordered an XL model. After a couple days, the handset was shipped and arrived in a simple white slide out box with the outer branding: "Pixel - Phone by Google". 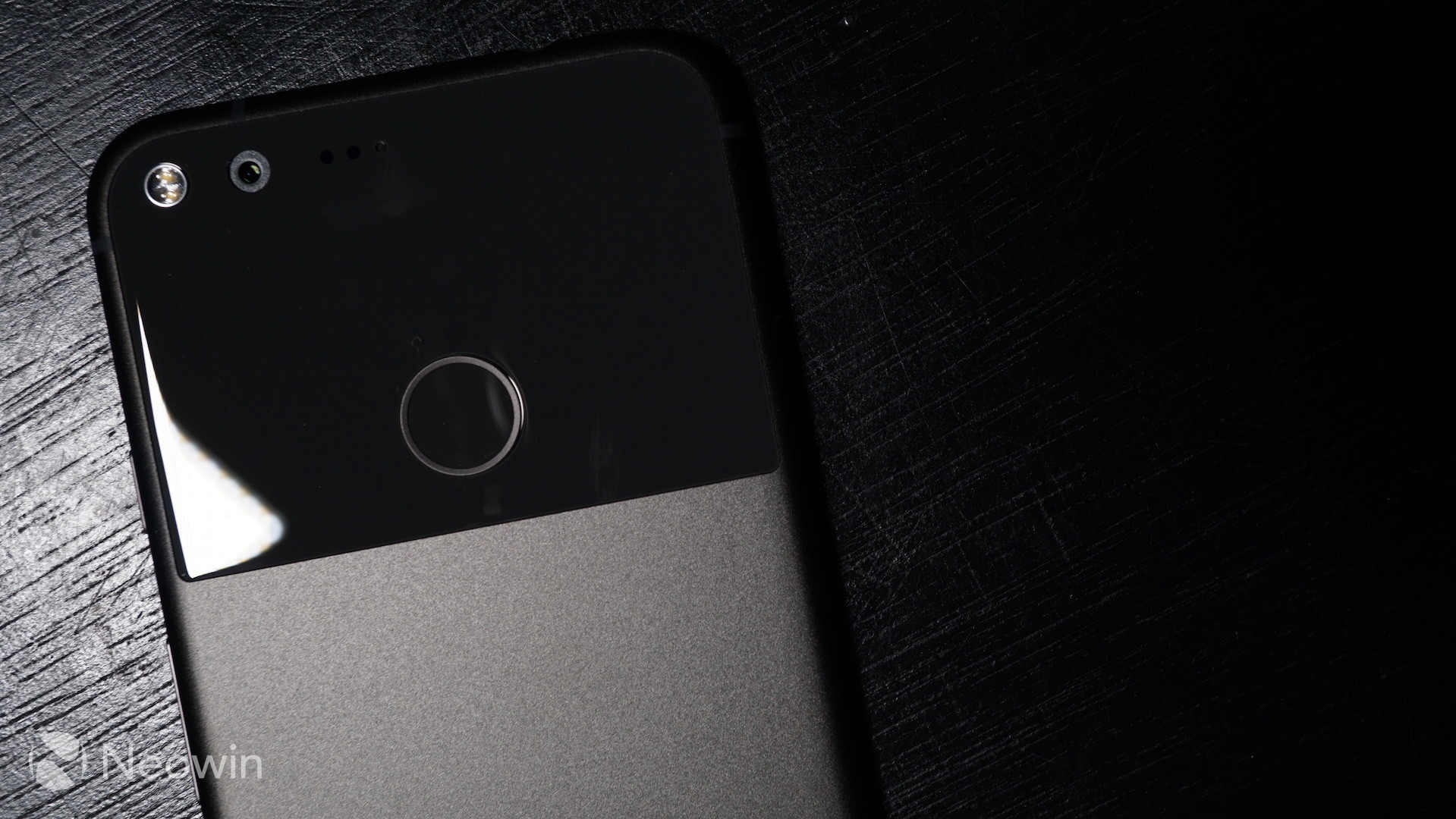 When you pick up the Pixel for the first time, you notice that the metal isn't smooth and has a fine granular texture to it. A majority of the handset is made from aerospace grade aluminum with the exception of the glass "shade" that can be found on the upper portion of the rear. While it isn't the most attractive accent available, it does provide a unique contrast to an otherwise flat look. The glass shade also surrounds the Pixel's fingerprint reader, 12MP rear camera, flash, and sensors. If you are one that tries to keep their handsets in immaculate shape, be warned, the glass shade does scratch easily. 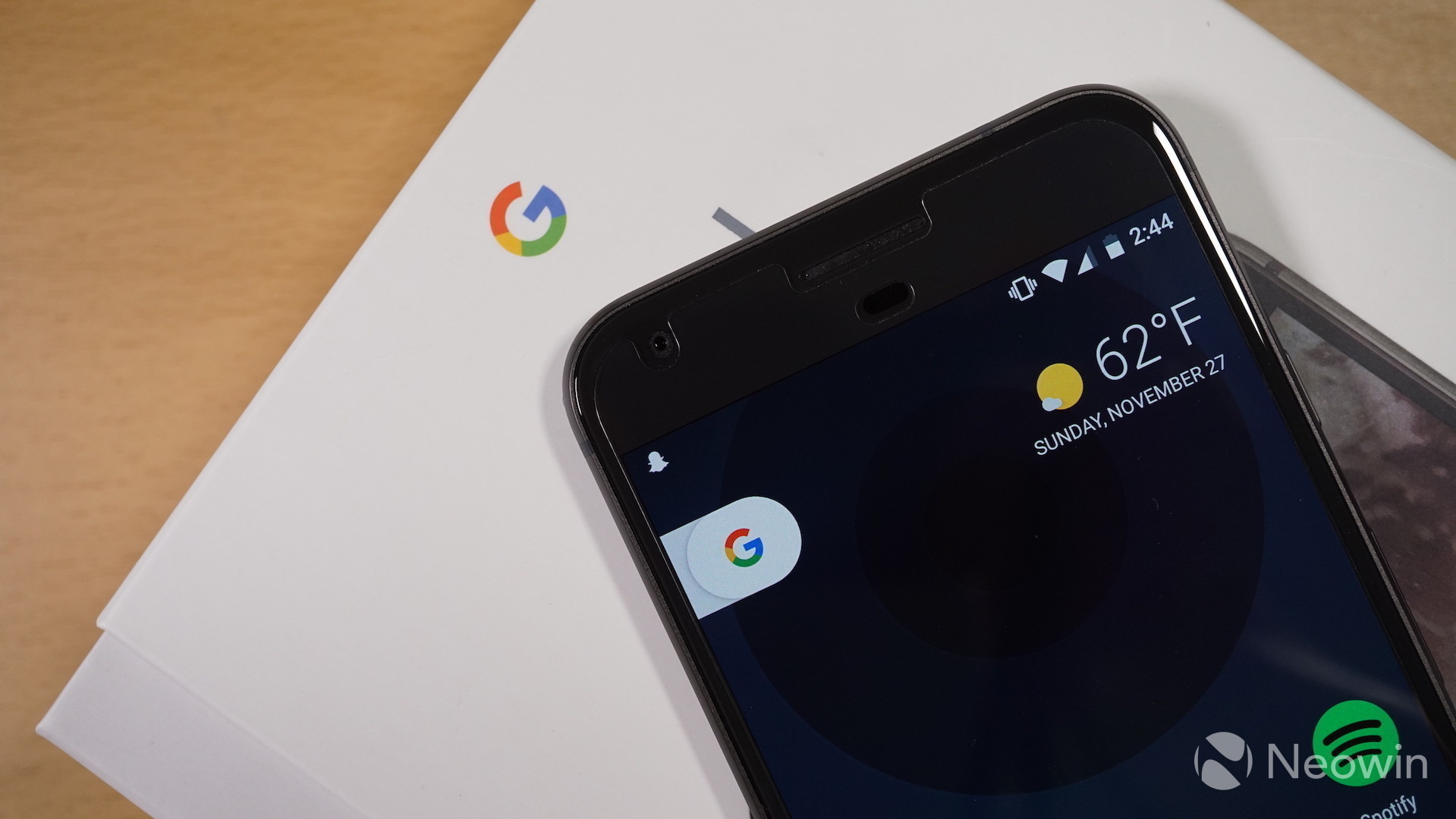 The front offers a large 5.5-inch QHD AMOLED display that looks crisp and offers excellent viewing angles. While I know that most displays suffer to some degree under sunlight, the Pixel XL suffers from a strange reflective effect that makes it hard to see.. This is the same type of issue I saw in the Moto Z and LG G Flex and while not as bad, it's odd that this type of issue would be seen on a top-end handset. The display is flanked by wide bezels on the top and bottom. The bottom chin doesn't offer any buttons and seems to only provide symmetry to the top portion that houses the earpiece, front-facing camera, and sensor array. Although the sensor array doesn't look too bad on the "Quite Black" model, it's a bit more pronounced on the "Very Silver" variant. 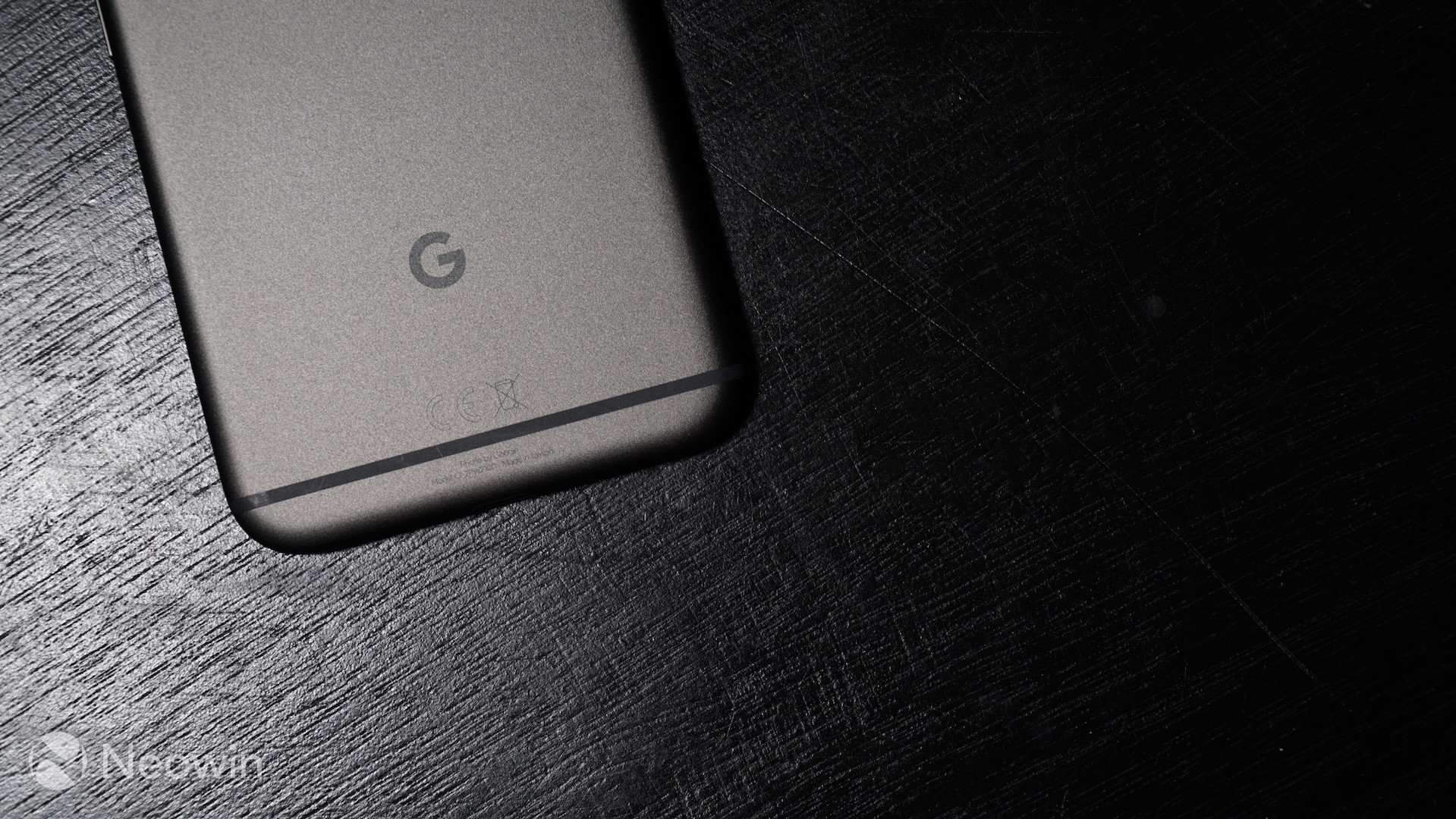 Although Pixel is being branded by Google as a completely new product line, its lineage stems from the Nexus line of devices. With the introduction of the Nexus One in 2010, it was clear that Google wanted to create the best possible platform to showcase its Android OS. After years of growing the Nexus line, it became like clockwork that a new Android OS would arrive with the release of a new device. That's why it was a bit of a surprise when LG announced in the summer their plans to offer the "world's first" Android 7.0 handset, which would effectively put the latest Android release ahead of Google's own handset. Although LG would ultimately announce the V20 and it would be the first smartphone to launch with Android 7.0, Google had a trick up its sleeve in the form of Android 7.1.

After setting up the phone, one of the first things you'll notice with the Pixel is that the customary app drawer is missing. Google hasn't made the drastic choice of removing it, but has instead, modified the action required to reveal it. In order to pull up apps, you now swipe up on the lower portion of the home screen to reveal a hidden app drawer. While it is different, the action feels familiar and intuitive. Google has also made accessing the notification bar at the top of the screen easier by having the fingerprint reader act almost like a trackpad - swiping down on the fingerprint sensor will reveal it, while swiping up will hide it. 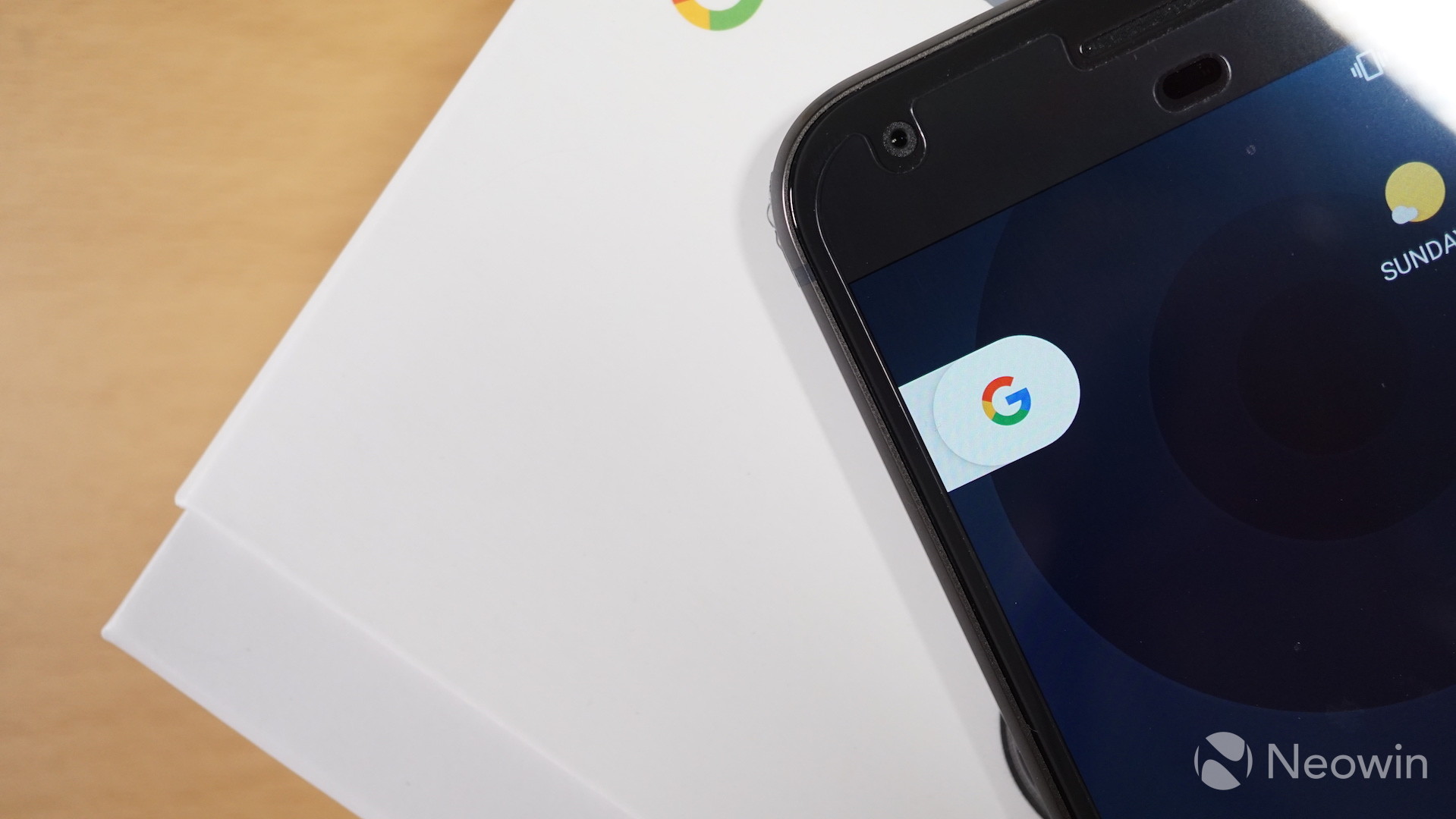 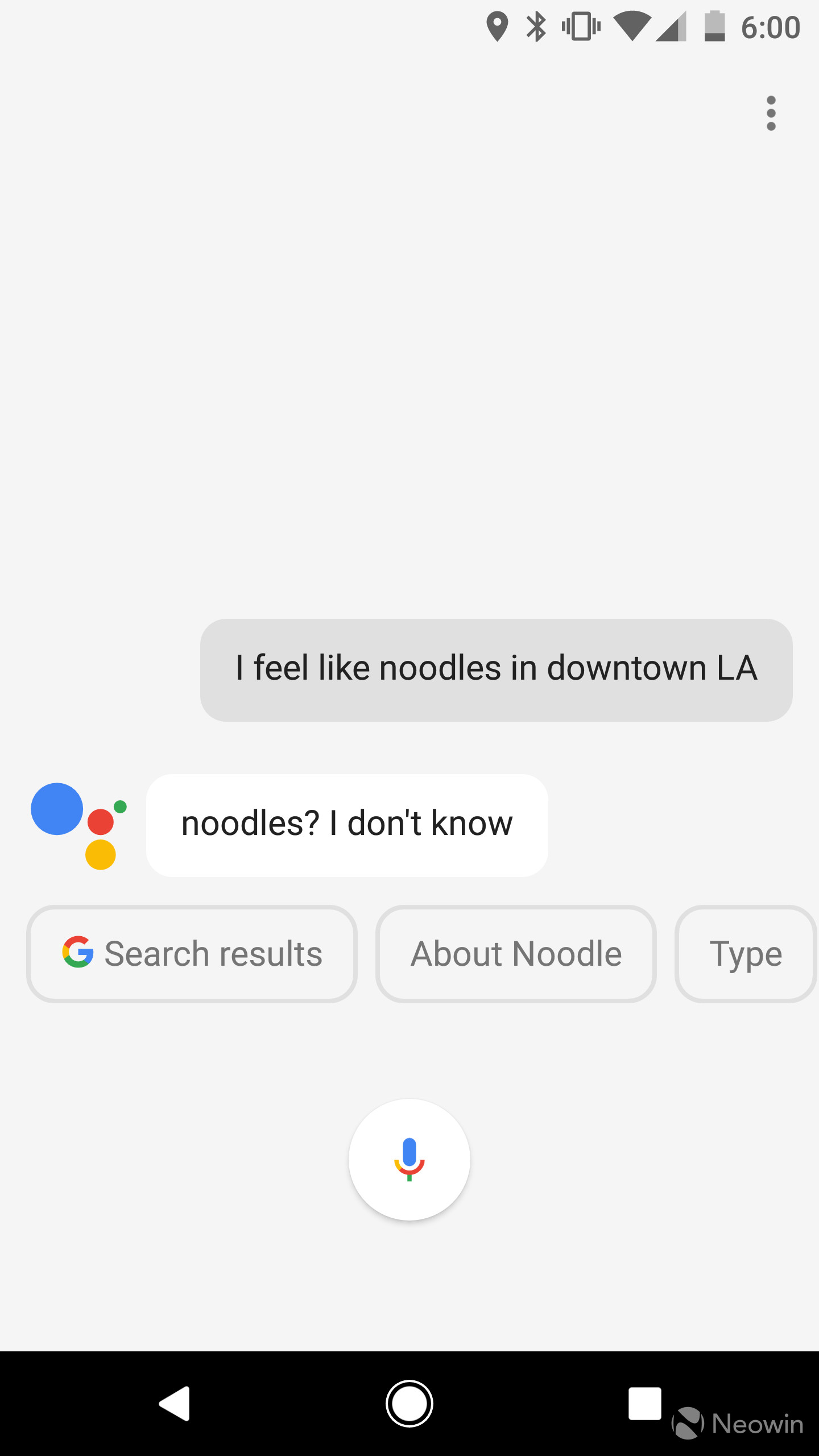 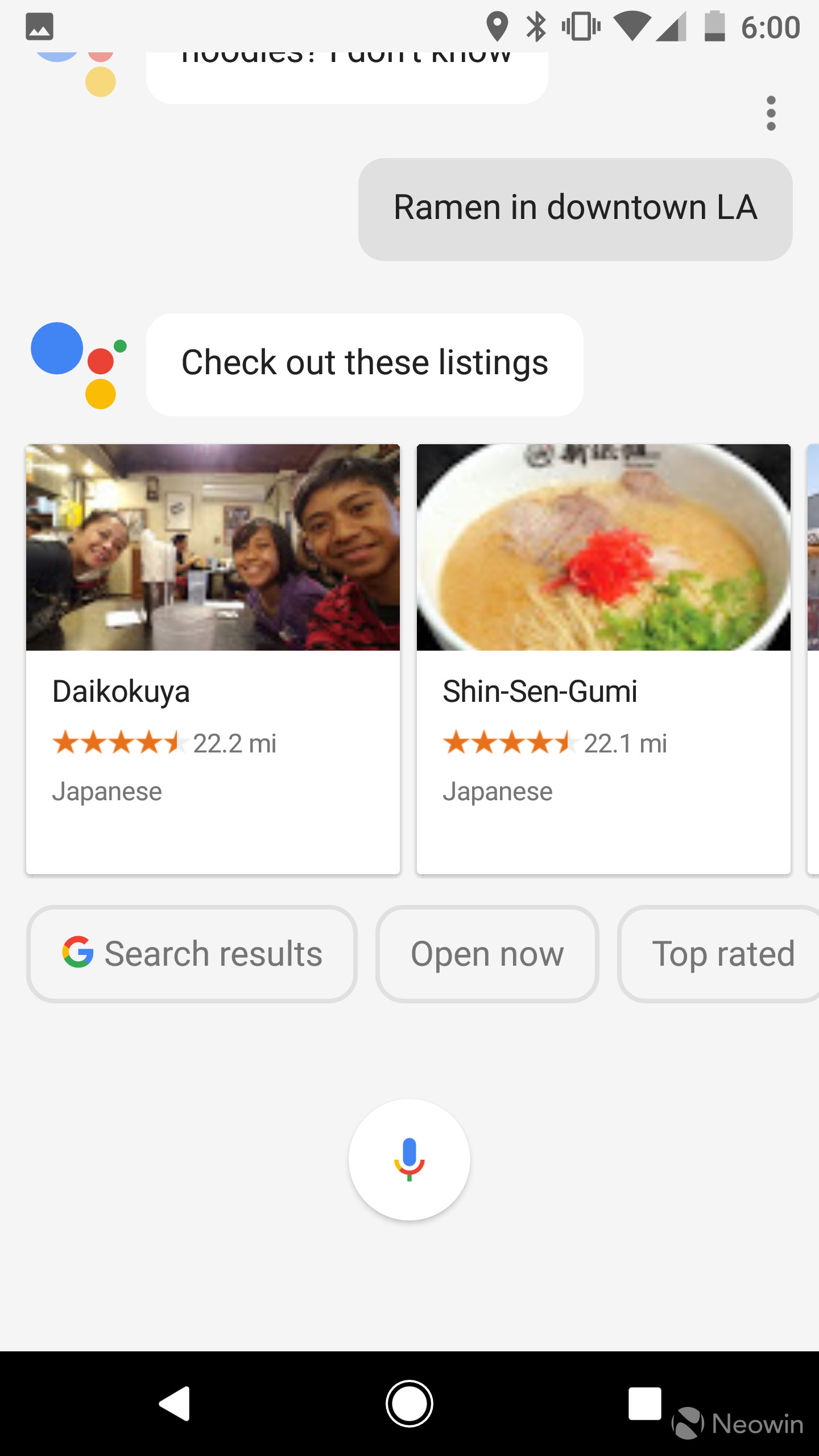 Perhaps the most coveted feature of the Pixel's OS is the embedded feature that is Google Assistant. Google's new digital assistant offers a smarter way of interacting with the handset. While previous Android handsets did offer an assistant, it was a bit limited in the way that it worked. With the new assistant, it understands the context of inquiries, allowing you to have somewhat of a conversation. In the screenshots above and below, you can see how the Assistant maintained contextual awareness of previous queries and how a sample session would unfold. While smart, you'll notice in the first screenshot, the Assistant failed to understand what "noodles" were, but when asked about "ramen in downtown LA", it has no issue deciphering the request. Although some might find the new assistant extremely useful, in my personal use, I felt it was definitely a work in progress. 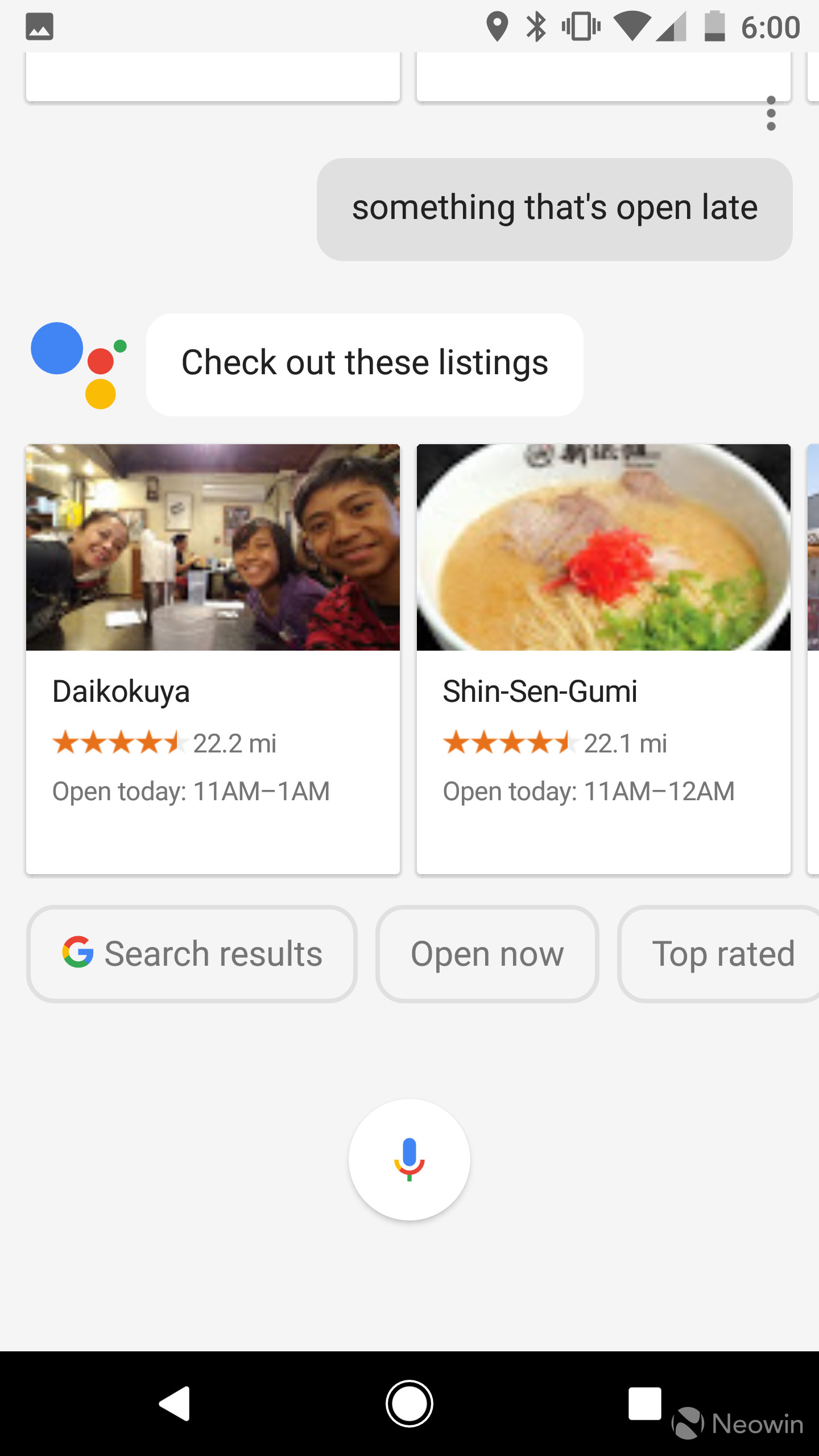 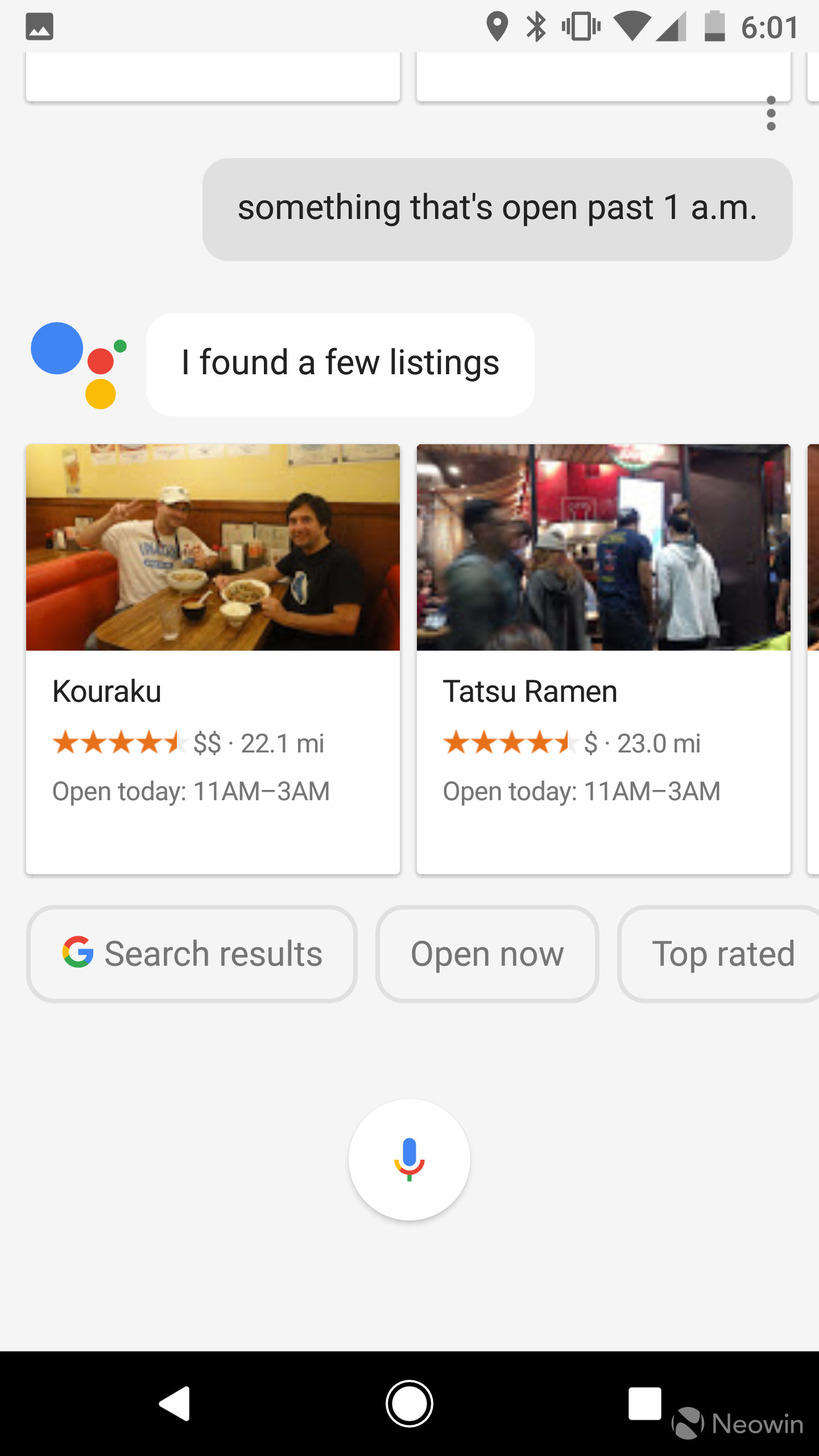 Naturally, the Pixel is an extremely snappy device with the OS functioning seamlessly with the hardware. The handset is powered by the latest Qualcomm Snapdragon 821 processor that is paired with 4GB of RAM. While a majority of the interactions within the OS are flawless, some third party apps did tend to crash every so often - which is different compared to handsets running Android 6.0. If you like looking through numbers, I have posted the results of three popular benchmarking tools and summarized results with devices Neowin has reviewed in the past. 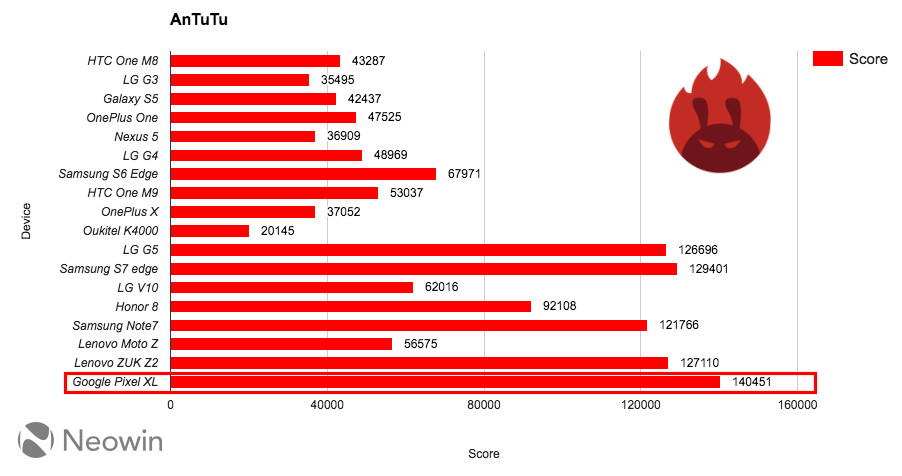 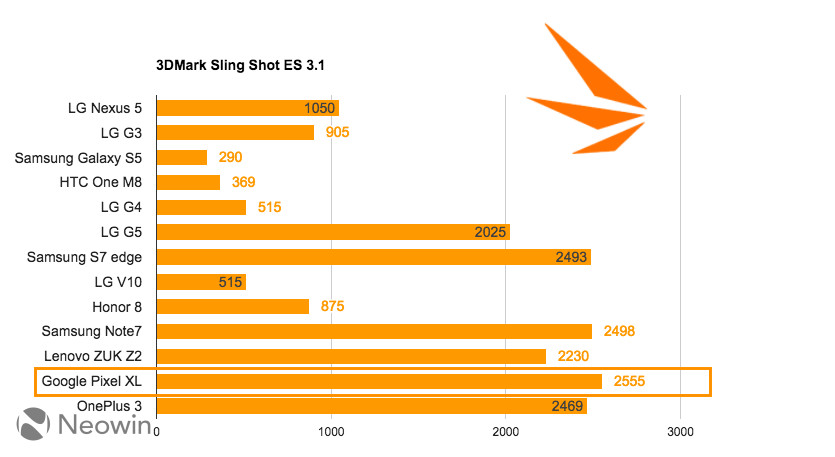 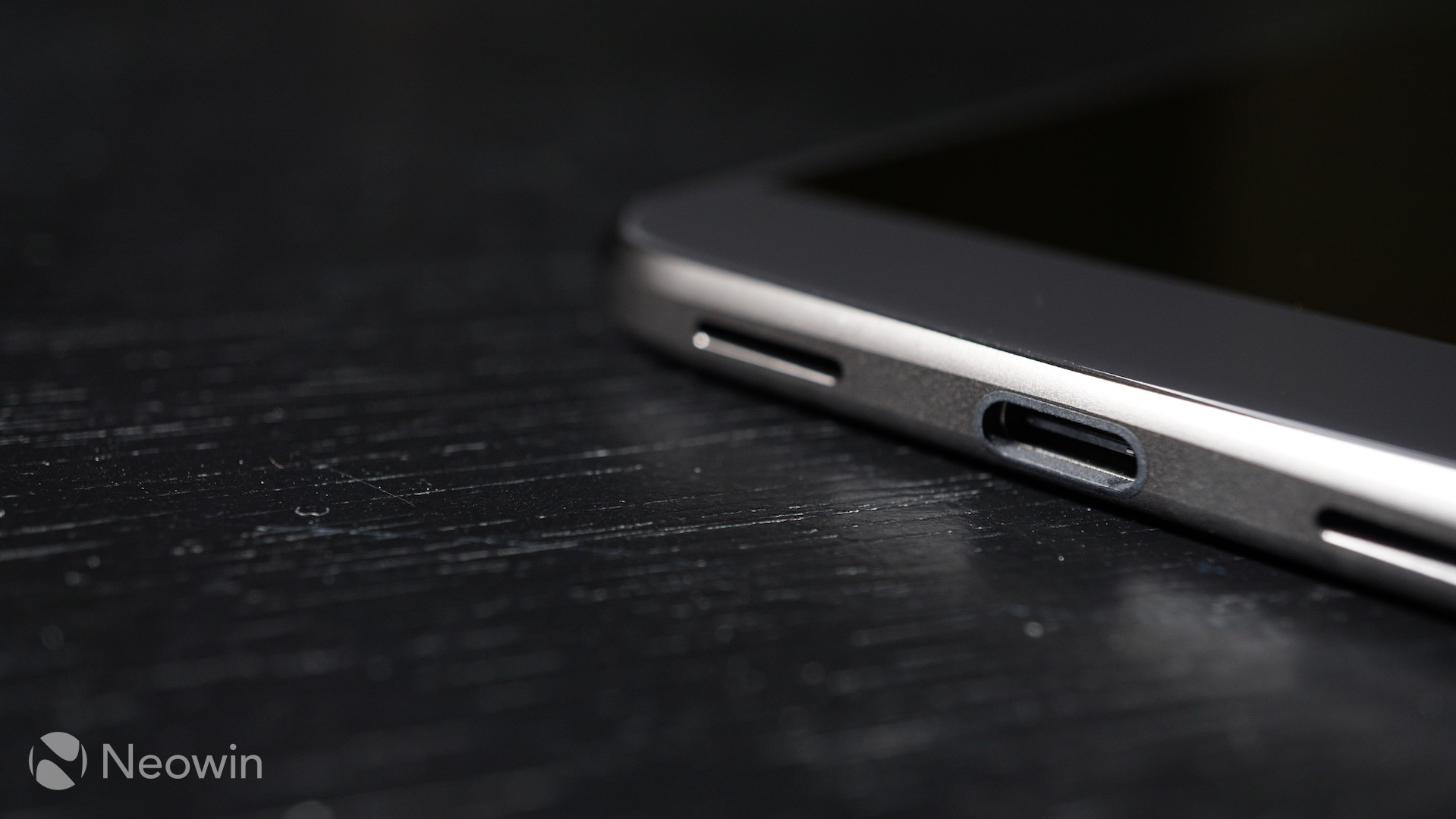 When it comes to the battery life, the Pixel XL offers a solid 3450 mAh battery that can last a full day. Although it can fluctuate depending on what you are doing on your device, for most, this should be enough. In my daily use, I tend to take it off the charger around 8am and won't have to plug it in until around 11pm. For my normal daily use, I rely heavily on Twitter, Gmail, Spotify, Hangouts, Slack and do a bit of browsing with Chrome. I also take a few photos and sometimes utilize Google Maps for navigation. If I use intensive apps like Snapchat or have a smartwatch connected to it, I can still get through the day, but I have to be a bit more mindful during use.

If there is a chance that you are running low and are unable to make it, you can always charge via the USB Type-C port. While not an issue for me, some will be disappointed with the handset's lack of wireless charging. Although the unit does support fast charging, it is not Qualcomm's own Quick Charge solution, so you will want to make sure you have Google's Pixel charger with you where you need fast charging the most or purchase a second adapter from Google. 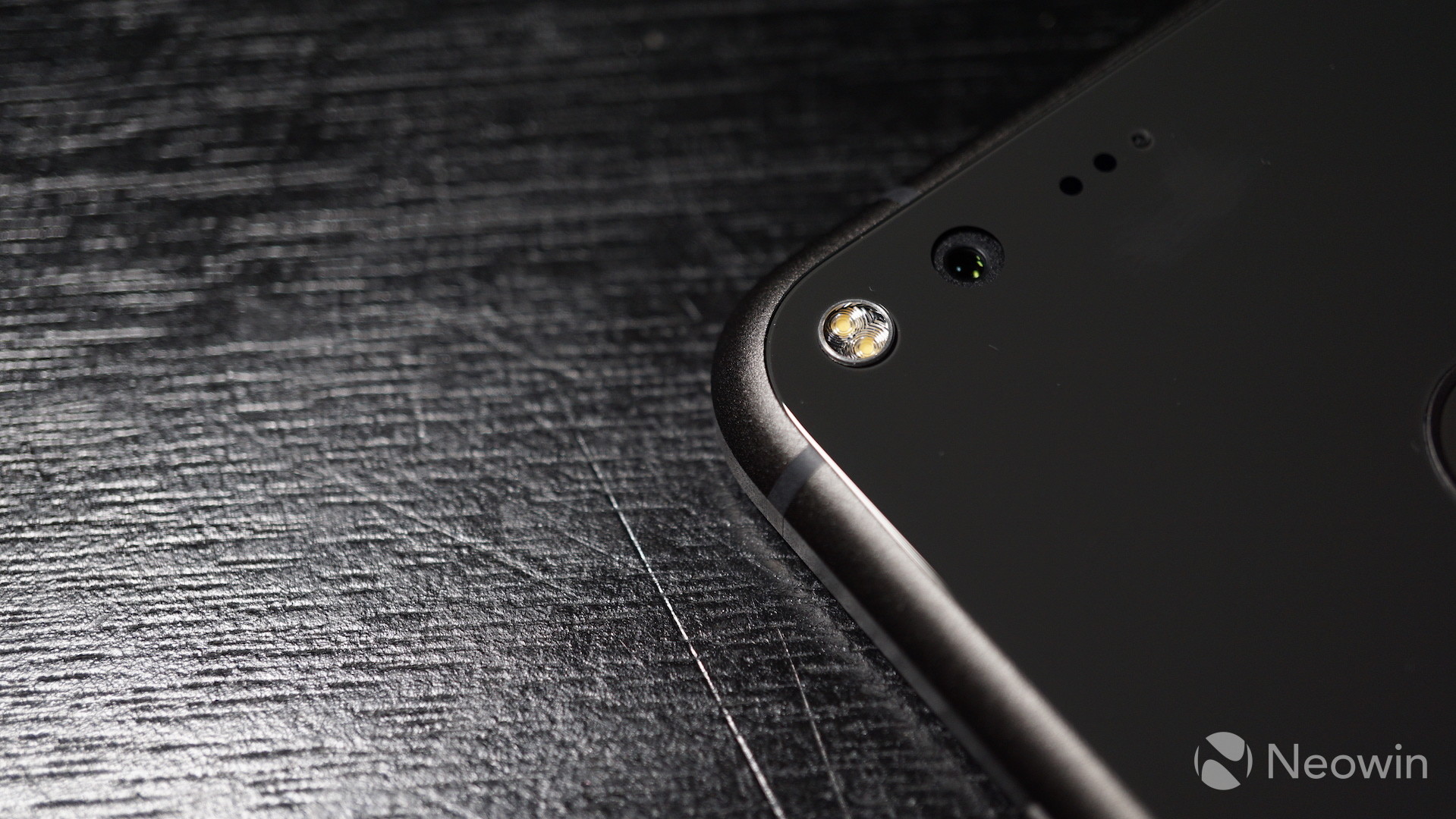 The Pixel XL's camera is probably the second most important feature that has been touted by Google. Google made a lot of commotion at its press event, flexing that the Pixel offered the highest DxOMark score of any smartphone.

When you launch Google's camera app, you'll notice that the interface is dead simple. It doesn't offer all of the bells and whistles or a dedicated manual mode, but the Pixel can definitely shoot some great photos. By default, the camera app will have "HDR+ auto" activated which isn't a full-blown HDR (there's a setting for that), but it enhances the image slightly by highlighting some of the details and accentuating colors while maintaining the ability to shoot and process instantly. 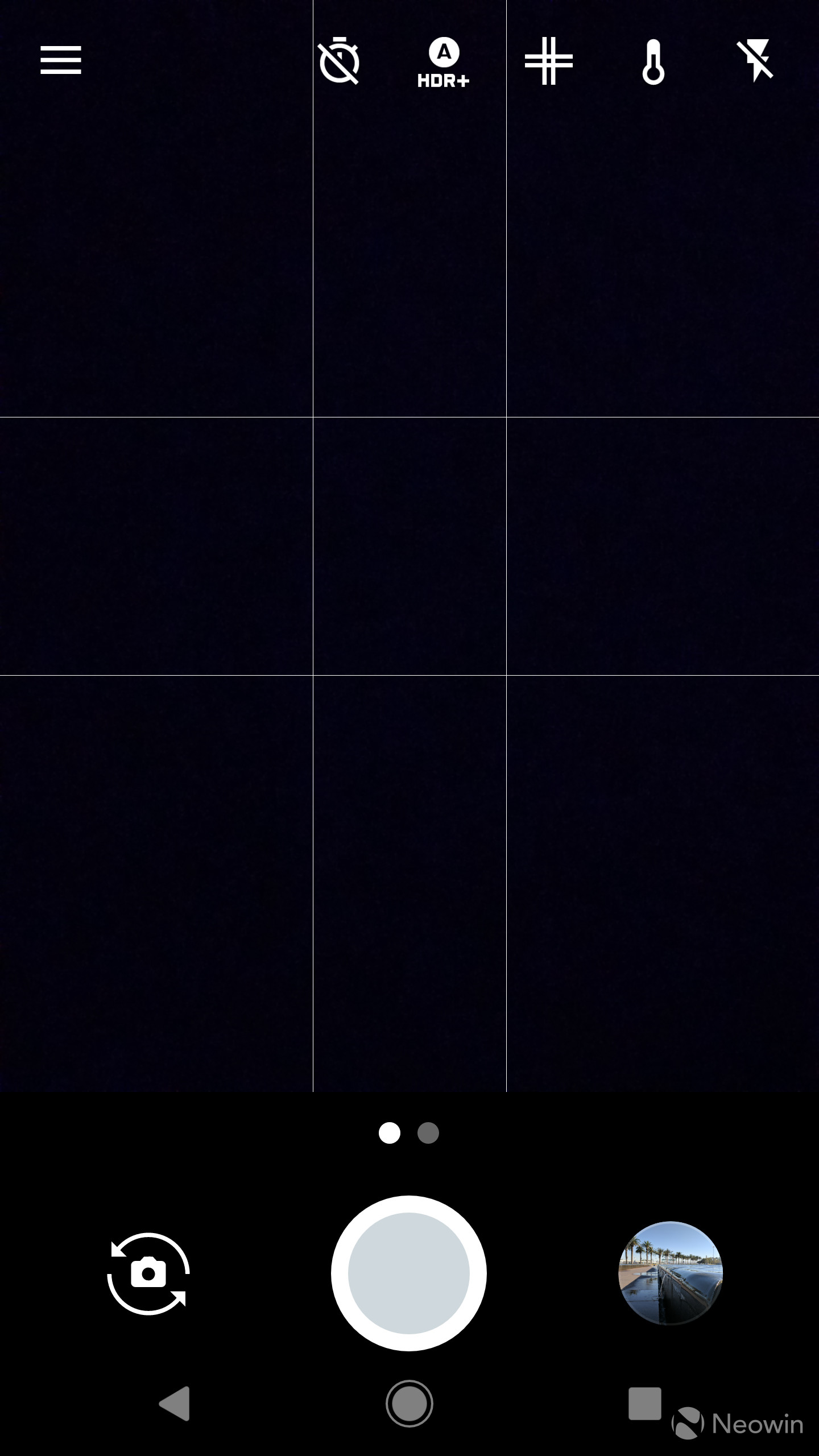 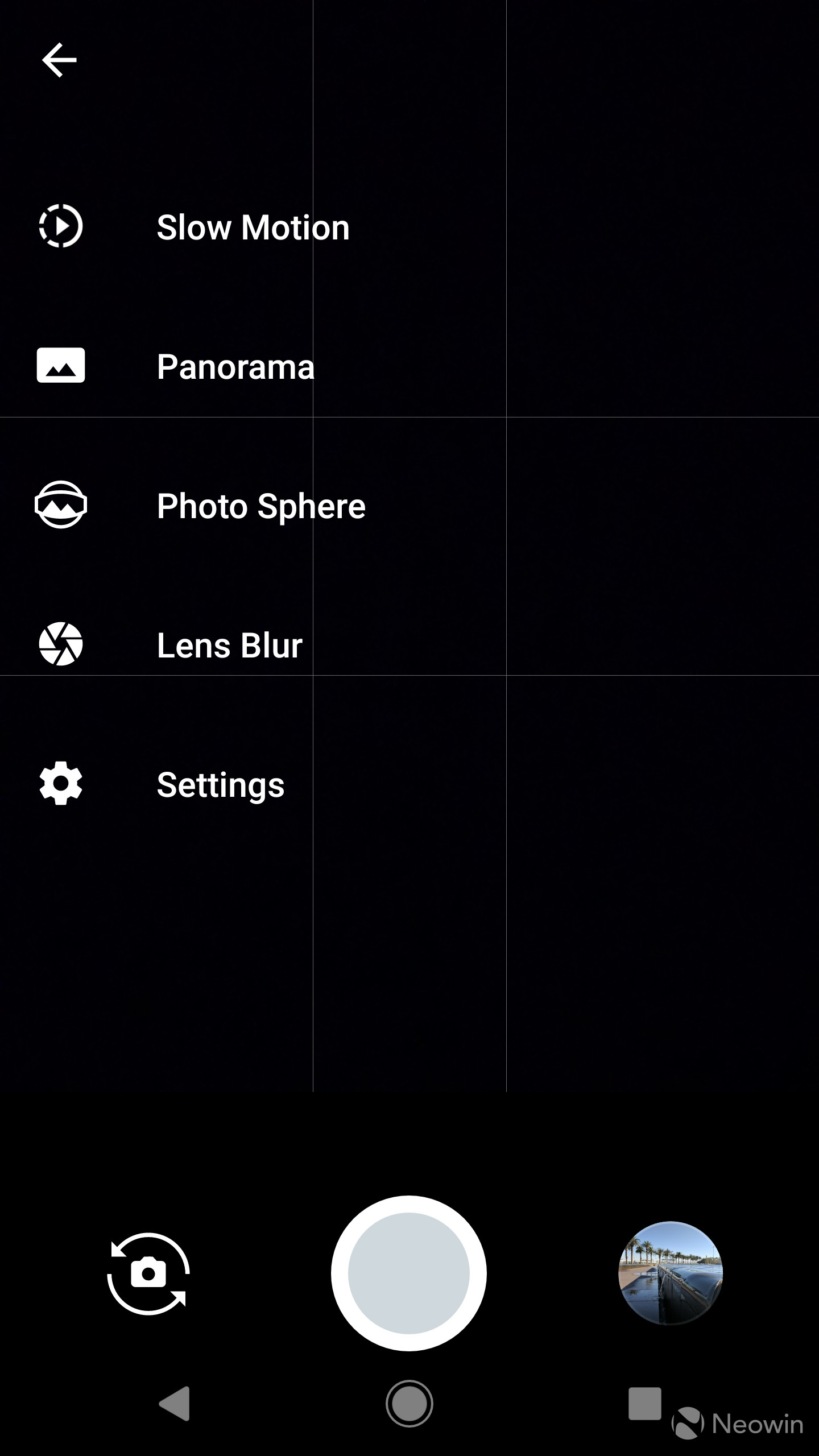 Personally, I prefer having HDR off, but it becomes a bit of pain to change the option each time the camera launches (yes, the default of HDR+ auto cannot be changed), so I have gotten used to just letting the Pixel do its thing, appreciating it. For the most part, the results are outstanding.

Like many other top-end handsets, the Pixel shoots great in well-lit areas and does a decent job during low light. Although the Pixel does not offer optical image stabilization (OIS), it does a fairly good job of convincing its audience that electronic image stabilization is pretty good. Many other handsets have tried this technique before, but the Pixel is the first to actually get it right. While OIS can have a leg up in stills, the Pixel uses its stabilization to perform magic when it comes to videos. 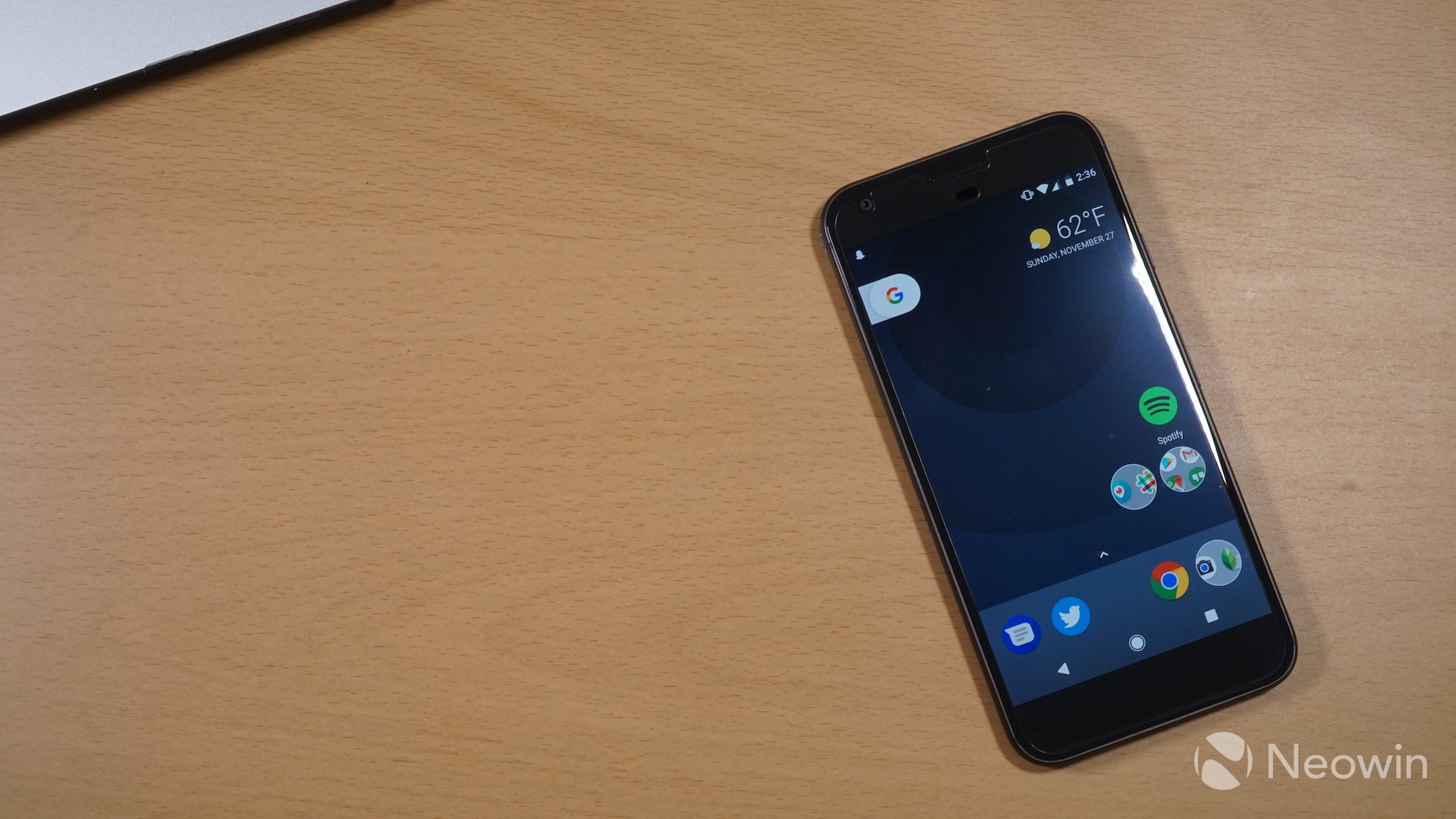 After using it for close to a month, I can say that I like the Pixel. I'm not quite as excited about it as others, but I like using it nonetheless. It offers the simplest software configuration and has a purity that can only be found on a handful of devices. There is also a bit of inspired confidence when you know your handset has the advantage of running the latest version of Android with future updates arriving with little to no delay. This is extremely important, as we saw in 2016, that getting the latest version of Android onto existing smartphones wasn't as expedited as it used to be. The Pixel also packs a couple exclusives for now like the Google Assistant - that could permanently remain as exclusives to the Pixel. 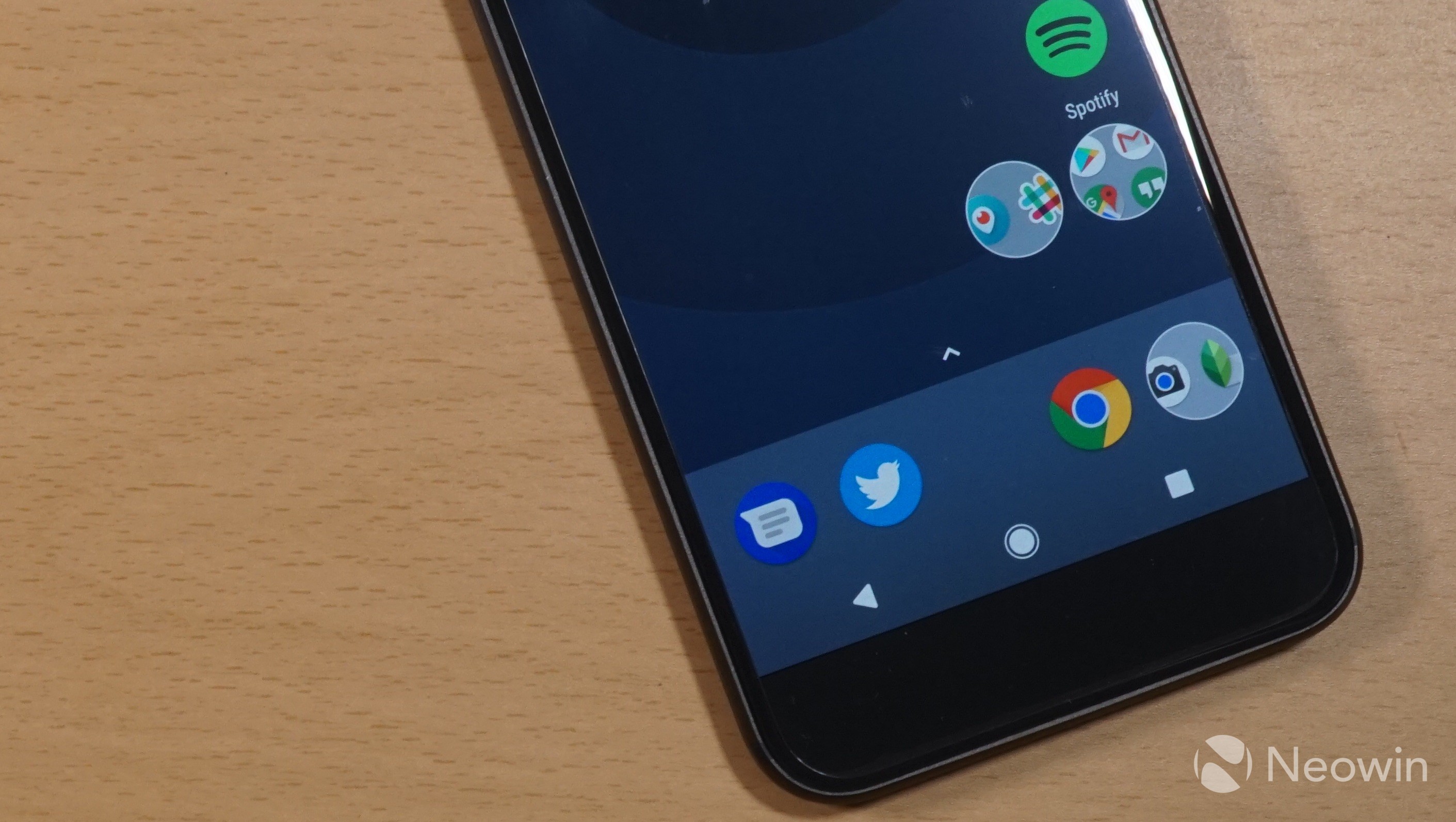 In all honesty, I can't quite put my finger on what makes people gravitate towards the Pixel. The above description could be the exact reasons why so many find the Pixel alluring. Personally, I think I am in the minority here when I say that I find the little niche features on Samsung and LG devices more appealing. While I can appreciate the experience on the Pixel, it isn't quite what I want when using it as a daily workhorse. The Pixel isn't your typical Android handset that tries to throw everything and the kitchen sink at a user. Instead, the experience is subtle and refined, making the menus easy to navigate. There isn't a lot of room for customization, but with the Pixel, Google thinks that you won't need to do all of that. It's a device that is meant to appeal to all and work flawlessly out of the box - and for the most part, it does.

While Google might have changed the name, the Pixel is a spiritual successor to the Nexus and with that, the company has done what it always does - produce a high-quality handset with the best of what Android has to offer. Although it might not be the most "complete" Android handset on the market, it's still technically a very good "first" try for Google and things can surely only get better. The Pixel isn't a handset that will excite you, but it's definitely a great Android device.