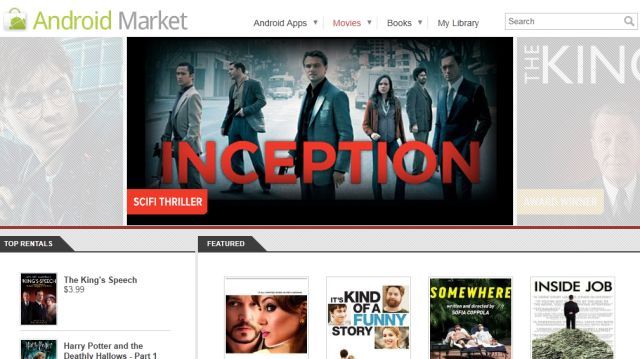 One of Apple's big advantages with iOS is its tie-in with iTunes to offer movie and TV show rentals and purchases. Soon, phones and tablets based on Google's Android Market will have their own iTunes-like movie download service. During today's Google I/O conference it was announced that the Android Market now supports movie rental downloads for the PC. You can check out the selection at the Android Market web site.

There are already thousands of movie titles available from various film studios like Warner Bros, Universal and others with a mix of new and catalog movies available. Once you download a film, you will have 30 days to watch it. Once you begin watching you will have 24 hours of access to the movie. Pricing will range from $2.99 to $3.99 for SD resolution movies to $4.99 for HD movies.

Google is clearly making a play to go after Apple's market for watching movies on various devices along with the Netflix streaming movie service which, while available for the iPhone, is still not available for Android. On Monday, Google announced that its YouTube website is now also offering its own movie rental services with a selection of films similar to the Android market.