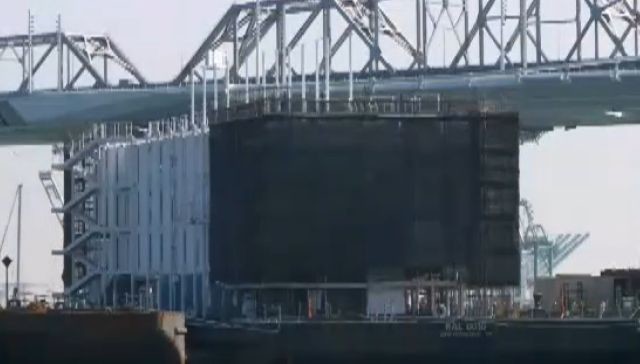 It's been the talk of the Internet for the past couple of days and it centers on a huge barge that's been docked just off Treasure Island in the San Francisco Bay. A massive four story structure has been under construction on that barge, but no one wants to talk about what the building is for, and who is paying for it. However, all of the rumors claim that Google is the owner of the mystery barge.

Recent rumors have claimed that the building is going to be a data center for Google when it's completed, but San Francisco TV station KPIX claims, via unnamed sources, that Google has spent millions of dollars to build a floating marketing center for the company's upcoming Google Glass product. The report claims that Google plans to send the barge over to be docked at Fort Mason in San Francisco itself when the structure is completed, where it will serve as a kind of store for Google Glass.

If that's indeed the plan, then Google might be in some trouble. KPIX claims that the company has yet to receive a permit to dock that barge at Fort Mason from the San Francisco Bay Conservation and Development Commission. Furthermore, according to BCDC executive director Larry Goldzband, Google might not be able to get that permit if it is supposed to be a floating Google Glass store. He stated, "The law is crystal clear in this case: The Bay is not to be used for something that can be built on land." In the end, Google might be spending millions of dollars on a floating Google Glass store that will end up never being used.