Wearable camera manufacturer GoPro have released their first app for Windows Phone in the form of the GoPro App. The app allows you to control your GoPro camera remotely using a Windows Phone 8 device. The app's main features are outlined over on the Windows Phone store:

Features include: full control of all camera settings; live, remote viewfinder/preview on your Windows Phone for easy shot framing, and more. 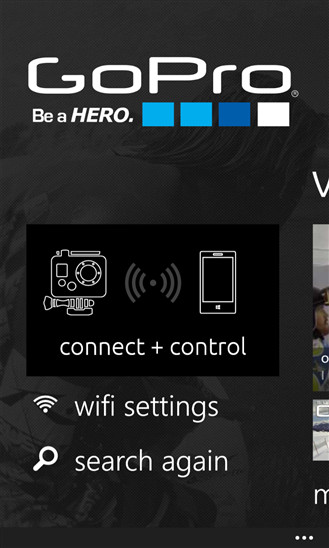 The GoPro App will also give you access to the company's Photo of the Day & Video of the Day channels to keep you updated with other GoPro users on the network. GoPro's HD HERO3® and HD HERO2® cameras are compatible with the app, and can be remotely controlled via your Windows Phone 8 device. Additionally, if you have a Nokia Lumia Windows Phone 8 device, the app allows for "Picture-in-Picture functionality", whereby your phone's camera view can be overlaid on top of the GoPro live view and take photos that are saved to your device's camera roll.

The app's description goes on to outline the compatibility requirements:

Widely used by professionals and hobbyists, GoPro cameras are often used to film in extreme situations, mounted on helmets, handlebars and so on. The newest iteration of the camera is the HD HERO3®, capable of capturing digital video up to 4K and 2.7K resolution. Despite the impressive 4K shooting ability, frame rate is reduced to 15fps on this setting.

The GoPro app is available now for download from the Windows Phone Store.