Sometimes games come out that get a lot of hype and attention beforehand and end up being a disappointment. The reverse has also proven to be true. Games that didn't receive much in the way of marketing or advanced previews get released and then later turn into huge sales hits and received critical acclaim. 10 years ago today, a game that fits the latter situation shipped to stores for the Playstation 2 console.

But this game from Scotland based developer DMA Design ended up being more that just a great game. It also changed the face of the game industry as a whole in a number of ways. No one predicted that would happen 10 years ago. The first two games in the series were fun top-down action games made primarily for the PC. You controlled a criminal who stole cars and went on a series of missions in those early games. The graphics were, to put it mildly, on the primitive side.

Not so for Grand Theft Auto III. DMA Design (now known as Rockstar North) decided to reinvent the series from the ground up, literally. Instead of a top-down world, the game took place in a fully 3D environment where your character saw things at ground level. It was an open world game, meaning that once you completely some missions more and more of the game's city would open up to you and you could explore and see as much of that city as you liked.

There were no "levels" in Grand Theft Auto III. While there was a storyline that you could follow you could just drive around in your stolen car in the fictional Liberty City (a pretty obvious stand in for New York City), listen to the radio station's music and commentary and have fun just with that kind of gameplay. DMA Design created a game that let you play as you wanted, not necessarily how the designers forced you to play the game. 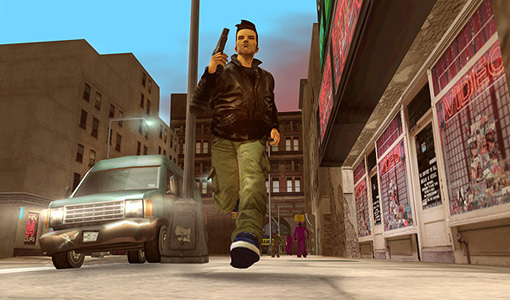 It was a game that had adult content that actually was adult. Yes, there were "M" rated games before GTA III. But this game took its storylines and characters seriously. If you followed the storyline you felt like you were in an interactive "R" rated movie, rather than in a cartoon-like violent game like the Doom series.

It mixed game genres with an ease that few games attempt to do even today. At its most basic level, it was a third person action game. But there were elements of role-playing games, driving titles, and adventure games in GTA III that gave the final product more depth and more replayability than most other games released at that time.

Looking back, the release of GTA III 10 years ago was a perfect fit for the generation at that time. Adults were spending more time playing games than ever before and DMA Design and Rockstar Games delivered a title that met their needs perfectly. Despite little hype before the game was released, sales of the game turned out so well it turned into the most popular game released in 2001.

The success of Grand Theft Auto III was also a huge boost for Sony's Playstation 2 console which had launched just the year before in the US. Rockstar Games chose to make GTA III a timed PS2 exclusive (a PC version was released in 2002 and an Xbox port was finally released in 2003). That decision caused millions of gamers to purchase a PS2 just to be able to play GTA III. It was a huge factor in making the PS2 the best selling game console of all time.

Grand Theft Auto III jump started the open world action game genre and since then other developers and publishers have tried their best to capture what DMA Design first created.  We have seen Activision try with its True Crime series and developer Volition and publisher THQ have also tried with the Saints Row games. Avalanche Studios' Just Cause series was more action oriented but still entertaining. This week saw the release of Batman: Arkham City which definitely has some GTA III roots.

In the end, it turned out that the only developers who could make a truly better open world game were the folks behind GTA III. In 2002, the team, now under its Rockstar North name,  released Grand Theft Auto: Vice City. It took the formula established in GTA III to a new location and in a 1980's time period. It was bigger, more polished and had more features than the original. While GTA: Vice City is technically a better game it certainly couldn't have been made without the lessons learned from GTA III.

In 2004, Grand Theft Auto: San Andreas was released via Rockstar North. It was even bigger than Vice City in that there was not just one city to explore, but three metro areas, plus the region in between. It was a truly massive game (perhaps a bit too massive) in terms of its content. In the end GTA: San Andreas became more well known for its hidden "Hot Coffee" mission which was discovered when the game came to the PC in 2005.

This simulated sex mini-game, which could not be accessed without some third party code put in, cause a massive uproar, with the ESRB switching the game's rating from an "M" to an "AO" (Adults Only) and forcing Rockstar Games to pull the console game from shelves and re-release it with the "Hot Coffee" content taken out (the PC version removed it with a patch). It created a huge outcry from politicians to police the sales of games in general which thankfully didn't happen in the end.

After nearly four years, Rockstar North finally released Grand Theft Auto IV for the PS3 and Xbox 360 consoles (and later for the PC that same year). It went back to Liberty City with an all new engine that looked spectacular. More importantly, it kept that sense of immersion that the previous games had but under the hood of next generation graphics. Later the game would get two downloadable add-on packs.

While we await word on when Rockstar Games will reveal Grand Theft Auto V (it may not be announced yet but it's almost certainly in the works) today is a good day to look back at GTA III and how much it really changed the face of games as a whole. It remains an entertaining game that sucks you into its world and keeps you there while you drive, shoot, and otherwise live in Liberty City. It's a true achievement and will remain as one of the landmarks of the game industry for all time.