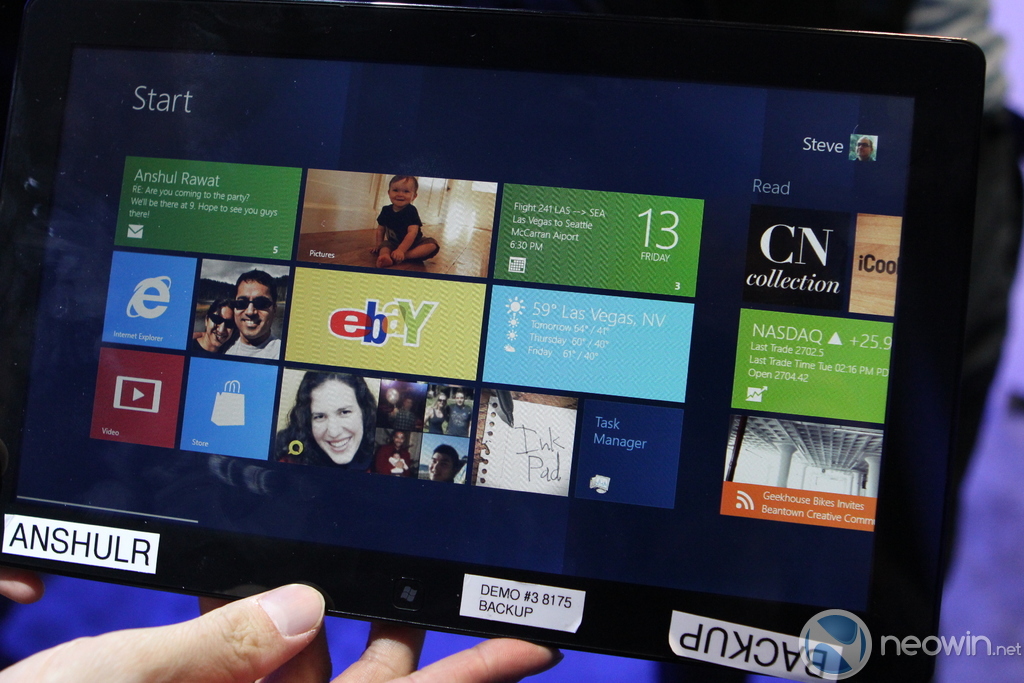 The elephant in the room here at CES this year is truly Windows 8. Microsoft's talking about it, but not much. Manufacturers have hardware that should be running Windows 8, but has Windows 7 onboard instead and they aren't willing to say what their plans are. It's a shroud of mystery that Microsoft is trying to maintain until the public beta is out come late February.

However, some demonstrations of the pre-beta software are on the floor here, and today, we managed to corner a Microsoftie and get some actual hands on time with a Windows 8 tablet. It's truly exciting to see how far the device has come over the last few months. This is the same hardware that was given out at Microsoft BUILD back in September, just with updated bits inside. Here's what you'll see on an entirely stock Samsung Series 7 when it's booted and logged into for the first time; 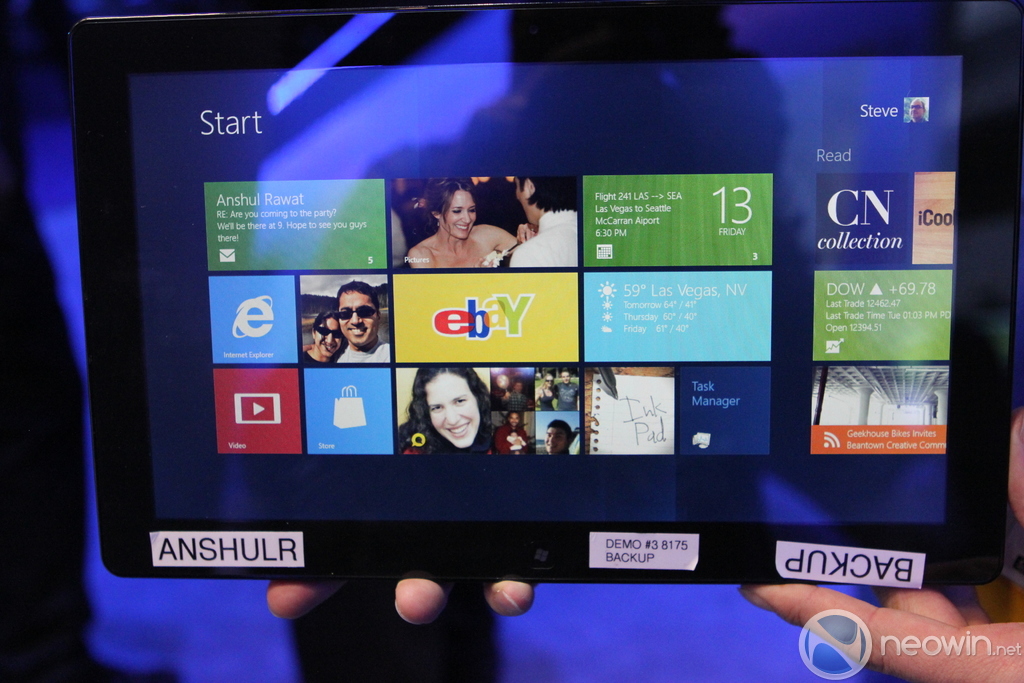 What's the first thing you'll notice? The color is so much better. This blue is the default now but Microsoft actually finally has enabled the color picker in the beta (small things count) and you'll be able to actually choose your background type (the texture) through a simple menu in the metro control panel (pictured below).

Remember that the Metro control panel doesn't correspond to the original Windows control panel right now. Some options -- such as sync controls -- simply aren't configurable through the classic method. This might annoy a lot of users if it's not fixed, Microsoft wouldn't comment if this was the case, either. 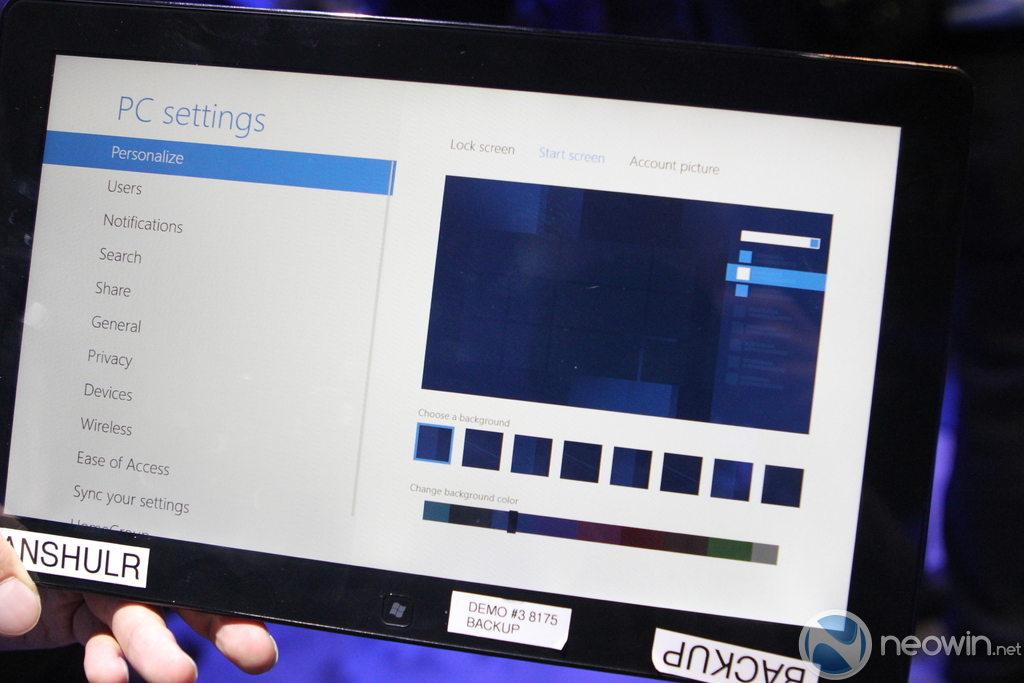 While we're talking about the settings menu, there's some great new options buried in here. We weren't allowed to take pictures of most of them, but there are options to constrict applications to what data you wish to allow them to access, you can restrict the over the air syncing between devices to not happen over 3G now and there are deeper options to customize the on screen keyboard. 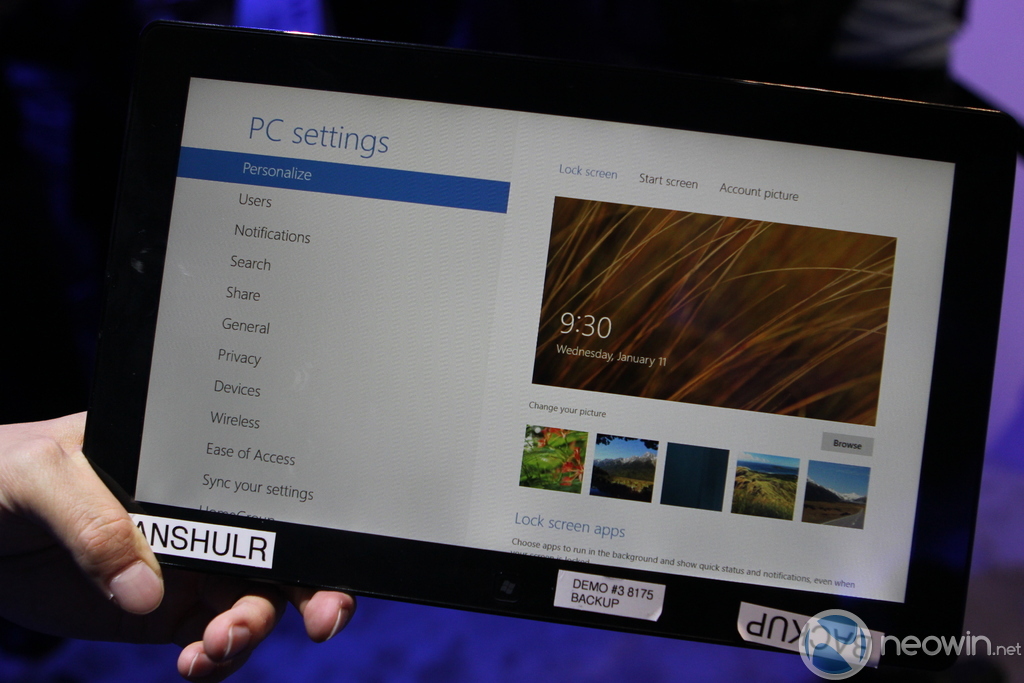 We were really impressed that Microsoft is trying really hard to get away from the concept of having to locate where files are with Windows 8. There have been countless situations where I've spent large amounts of time searching to find a picture, only to find it thirty minutes later in a folder I didn't know existed. Microsoft has solved this problem in this version of Windows and actually aggregates all of one type of file into one place, simply. 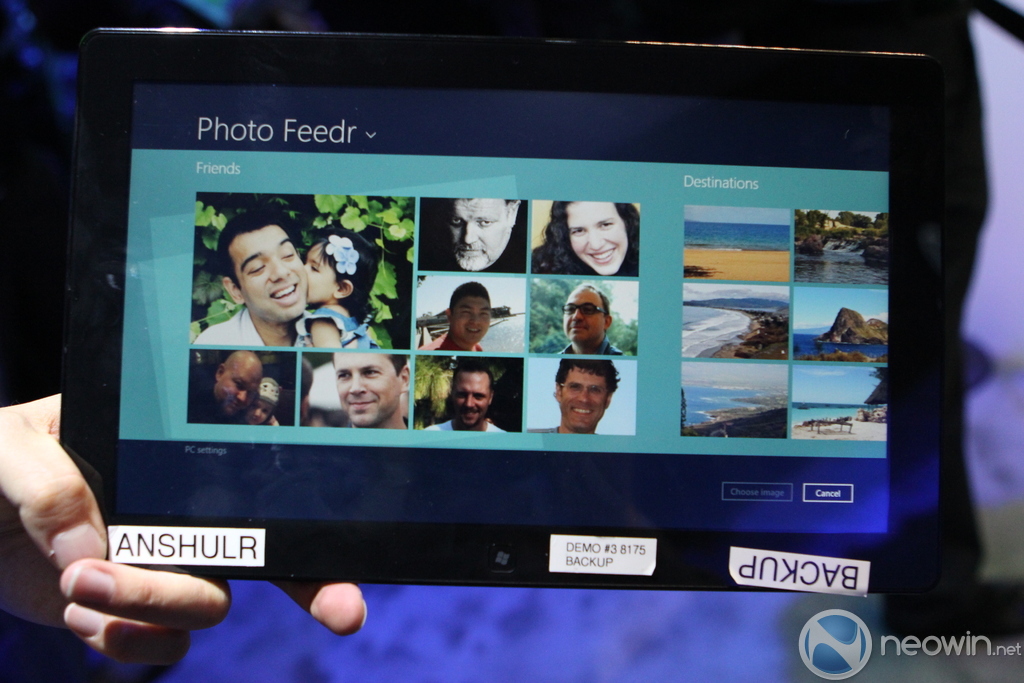 The application that enables this is called "photo feedr" right now, and it really blurs the lines between where the files are on your hard drive, or if they're stored in the cloud. It's all the same. Naturally, you can drill down deeper than this and define which service or location you want to look at to narrow it down a bit more, which is especially useful if you have hundreds of pictures. This applies for other types of content, too, such as videos and (hopefully) documents. 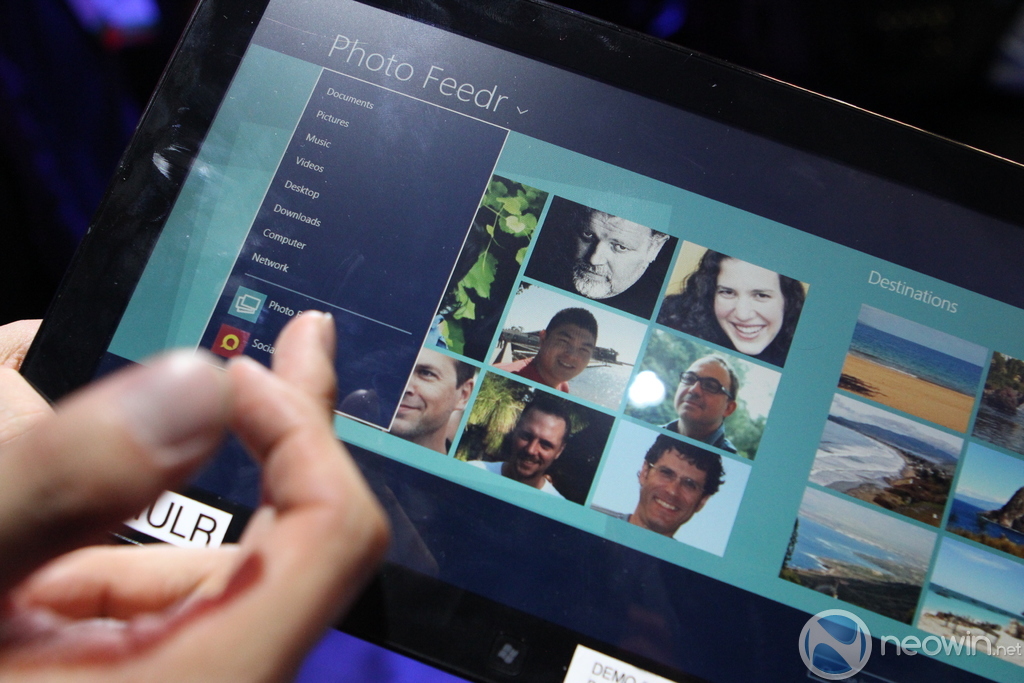 What got us really excited is the messaging integration here. We spotted it on the home screen (pictured in the middle of the device screen below) and it appears to be properly integrated now. We can't show you any pictures of the actual application, but we can confirm it has deep integration with SMS, Facebook and Windows Live, just like Windows Phone. It even looks like you'll be able to pair your tablet PC with your Windows Phone 7 device, and send/receive SMS via the application, too, but we're yet to get formal confirmation on this one. 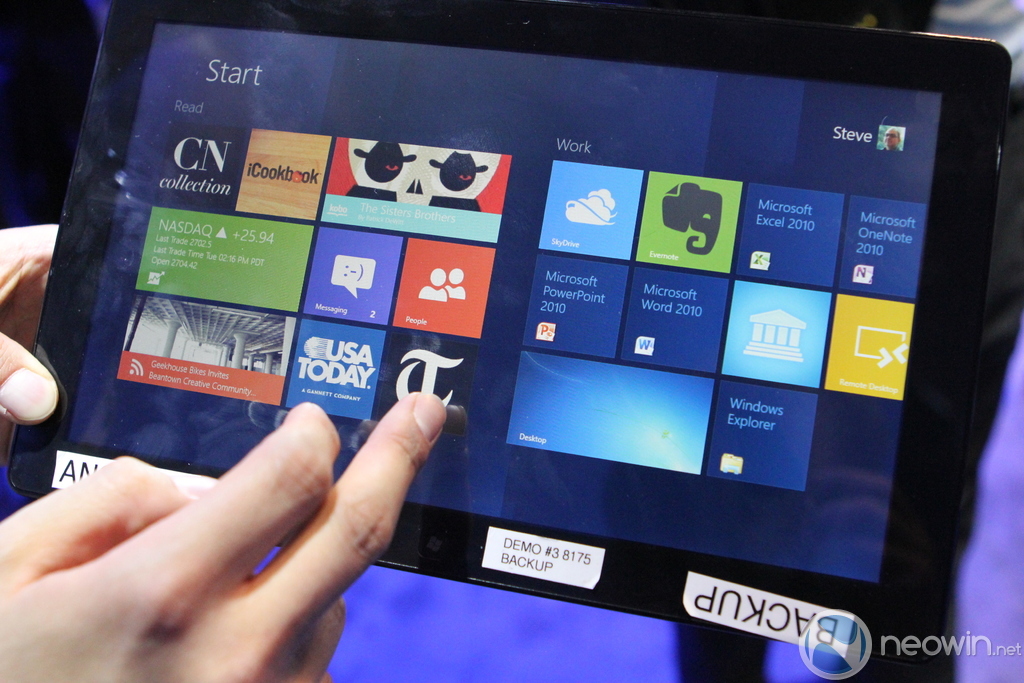 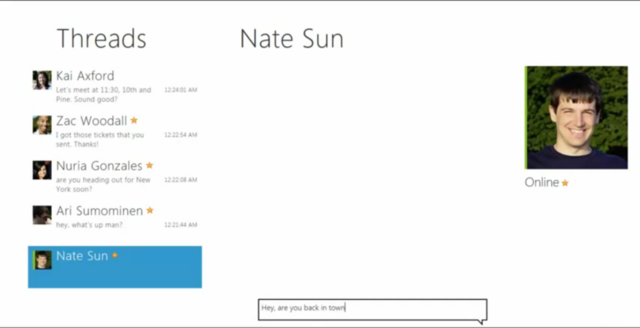 Other neat things we spotted? Evernote has a Metro based application already, as does Kobo (pictured above, complete with working live tile) you can now pin people via the people application to your device screen (and there's options here to call them now; it's not clear if that is on the device or via a paired phone), and Xbox Live support will be enabled in the beta. 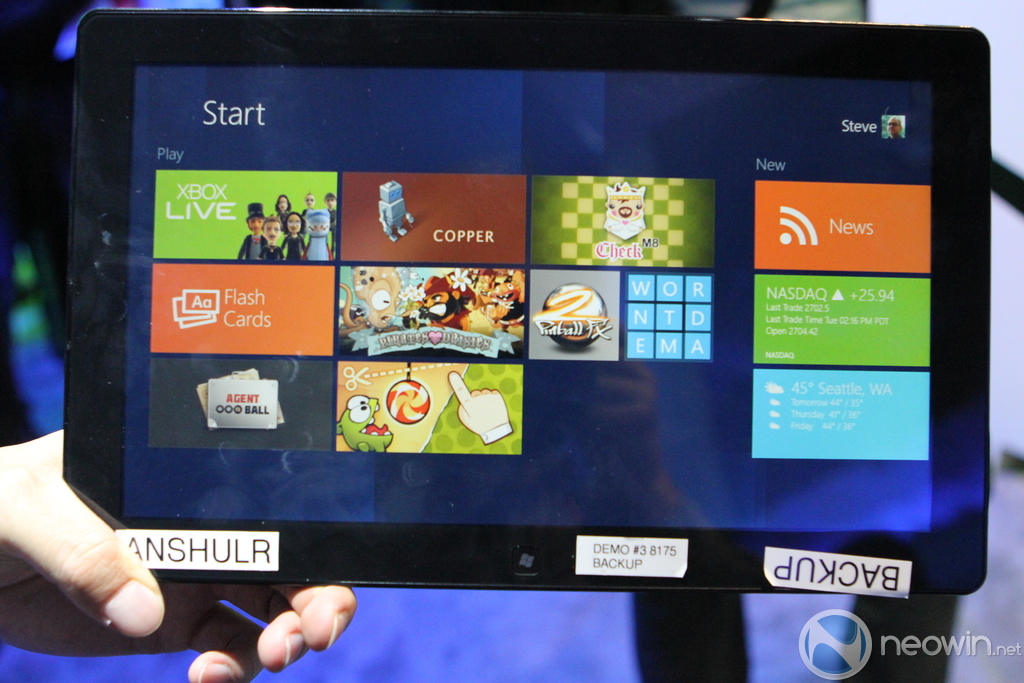 One last thing: It looks like Microsoft may be about to rebrand Zune as "Microsoft Music" come late February. We spotted multiple places throughout the OS with references to the product, with emails being able to source the currently playing information from Microsoft Music, and on the home screen there's a shiny new live tile that shows the branding of the new product as well as what's playing.

It also could be Microsoft rebranding Windows Media player, as the "video player" has now been seperated out as well. At this point, only time will tell, but our gut feeling tells us that the Zune branding is going to disappear over the space of this year, considering the timing of a "end of 2012" release of Windows 8 and the next expected Windows Phone update; Apollo. 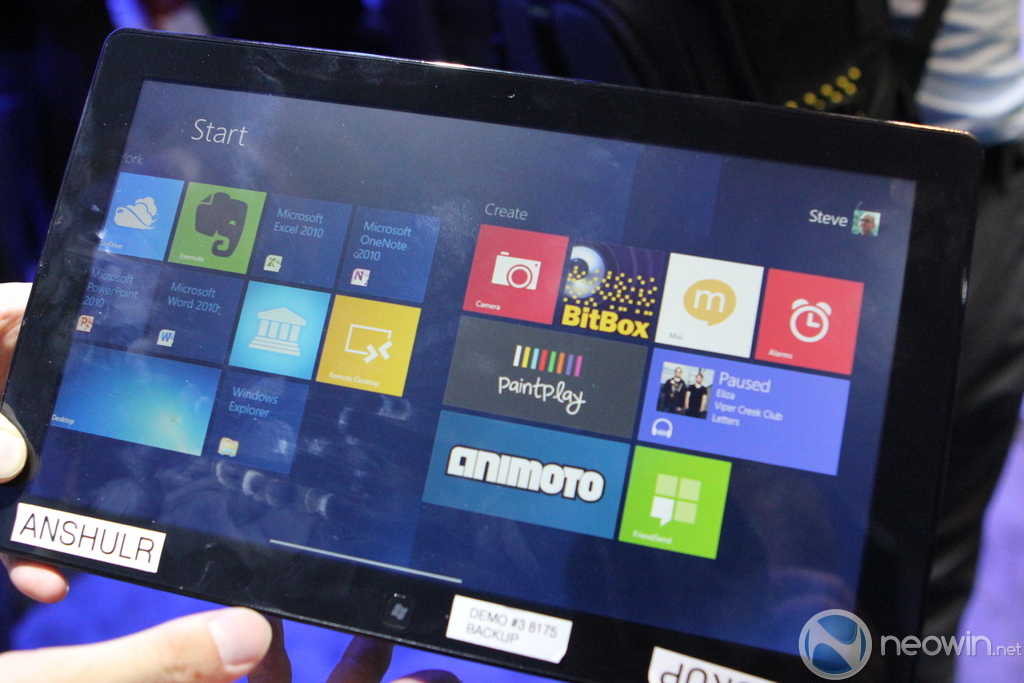 The best part is, this isn't even the tip of the surface. Small touches have been made, finally. The taskbar is now entirely styled in Metro black. Animations have slightly changed. Gestures and keyboard reconfigurations have been made. There's lots more we weren't allowed to look at, and we'll have to wait patiently until next month to try it out in depth.

Indications from manufacturers with their "reference devices" for Windows 8 behind glass here at CES is that they'll be able to be more open about their devices once the beta is available, too, so expect a deluge of Windows 8 news soon enough.