When Microsoft announced Windows 8 and Windows RT, it stated Office RT would come bundled with all Windows RT devices. That's true, but the fine print was that the bundled version would only be for non-commercial use (the included version is Office's Home and Student edition).

As noted by Mary Jo Foley of ZDNet, Office RT is "not for use in commercial, nonprofit, or revenue-generating activities. Commercial license options available (sold separately)." After researching the matter further, one of Foley's Twitter followers found the following slide pertaining to Office RT. 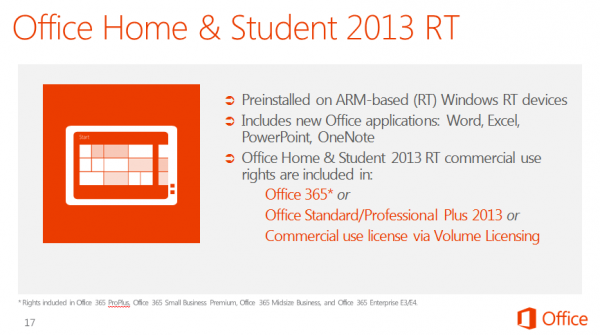 What the slide means, as noted by Foley, is organizations or users who have an appropriate Office 365 license (365 ProPlus, Office 365 Small Business Premium, Office Midsize Business or Office 365 Enterprise), Office Standard/Professional Plus 2013 or a commercial use license through volume licensing will be able to use Office RT for commercial reasons. The actual Office RT suite will not be any different with one of these licenses, however – Outlook or Access will not be included, for instance – it will merely grant users the right to use Office RT for commercial purposes.

When Foley contacted Microsoft, she received the following statement:

While Office Home & Student 2013 RT Preview and the final edition are not designed for commercial, nonprofit, or revenue-generating activities as sold, organizations do have options for using the applications commercially – including purchasing commercial use rights or licensing any edition of the new Office with commercial use rights.

It's not known if Microsoft has plans to release Windows RT versions of the applications missing from the Office RT suite for an additional cost. Neowin has contacted Microsoft for a comment on the matter, and this article will be updated if and when a response is received.