HP has sent out invites for a special event focused on their webOS platform on February 9.

The event, which will follow on almost a month after the world's biggest consumer electronics show CES, will likely see the unveiling of the next iteration of the webOS software.

Invites sent out to a number of press outlets today encourage reporters to attend to witness an "exciting" webOS announcement, and features HP's motto "Think big. Think small. Think beyond." The event will be held at the Fort Mason Centre in San Francisco, and start at 10am PST.

As TechCrunch notes, the timing is interesting because webOS was originally launched at CES 2009 by Palm before they were acquired before HP last year after the company's financial position worsened following the lackluster launch of new webOS devices.

Amongst other announcements, HP may also reveal their highly-anticipated webOS tablets which have yet to be seen so far, but were promised for "early 2011". The timing would also place the devices if announced in direct competition with the iPad 2, which is likely to be revealed later this month or early in February. And with a number of electronic manufacturers including Lenovo, Toshiba and Vizio expected to announce new tablets at CES, the market will certainly become tough for new entrants. 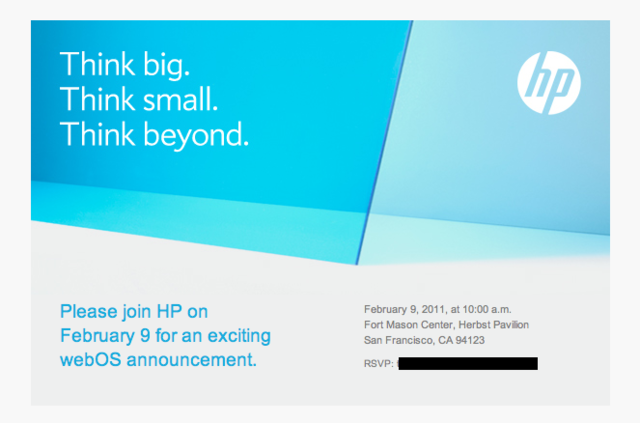