Huawei will take on giant Xiaomi's Mi Max phablet with an even bigger smartphone that's due to be announced next week. The company's Honor brand is holding an event in China on August 1 at which it will unveil its new Note 8. 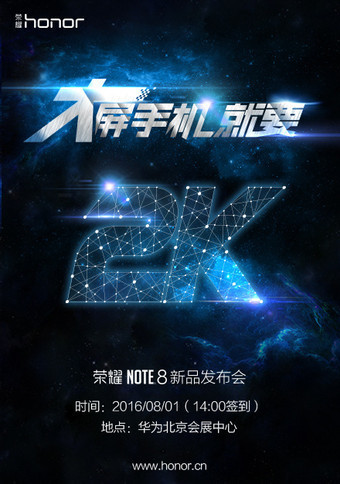 While the Xiaomi Mi Max is quite a handful with its 6.44-inch display, the Note 8 will trump its fellow Chinese rival with a 6.6-inch screen, featuring Quad HD (2560x1440px) resolution.

It's believed that two versions of the Note 8 will be available, both of which will feature a 13-megapixel rear camera, 8-megapixel front-facing camera, fingerprint sensor on the rear, and a USB Type-C port.

A more affordable variant, which is said to cost 1,999 CNY ($300 USD), should come with a less powerful Kirin 950 SoC, 3GB of RAM and 32GB of storage. Both will come with Android 6.0 Marshmallow pre-installed.