You may remember the rumors that were going around earlier this year about Microsoft's upcoming social network, which was going by Tulalip at the time. It turns out that Microsoft has been testing the service with select users since then, and The Verge's Thomas Houston got a sneak peak at the service, which they're now calling Socl. 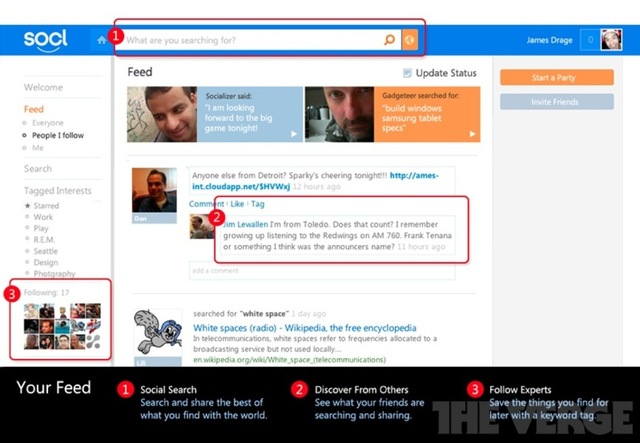 The site features a sparse Metro design with bare bones navigation controls, and a heavy emphasis on search. You'll find a prominent search bar at the top of the page, which works kind of like a status update. The search bar lets you share what you're searching for, like 'live Dylan covers,' or what you're doing, such as saying you're 'at a live Dylan concert.' This will drop the appropriate Bing results into your feed, so your friends can see, share and comment on it. The items can be tagged by type, and it's a completely voluntary process, so you only share what you want (rest easy, you don't have to share your, ah, 'private' searches).

It's been reported that the tagging system is a bit too specific, since most people aren't going to be searching for generic terms like 'film' or 'technology,' but considering that its in such an early stage of development, it's a problem that will hopefully disappear.

One really novel feature that Socl brings to the table is video party, which lets you chat live with your friends via webcam and watch YouTube clips together. Like the rest of the site, it's built completely out of HTML5, so it's fast and easy to use. It's possible that this could be built using the Skype infrastructure that Microsoft recently acquired, but since the whole project has been fairly quiet, there's no word on that.

Socl is coming out of Microsoft's FUSE research group, so it may or may not actually end up getting a public release. The Verge says that Microsoft is planning on rolling out a larger public test via an invite system in the near future.

Ultimately, Socl looks like another part of Microsoft's campaign to make search 'less lonely,' as they put it in a recent press release. The business plan is all about driving more traffic to Bing, and it's easy to imagine Socl functioning not only as a stand alone product, but as a way for you to share your search results through other services, like Facebook and Twitter.

Images courtesy of The Verge