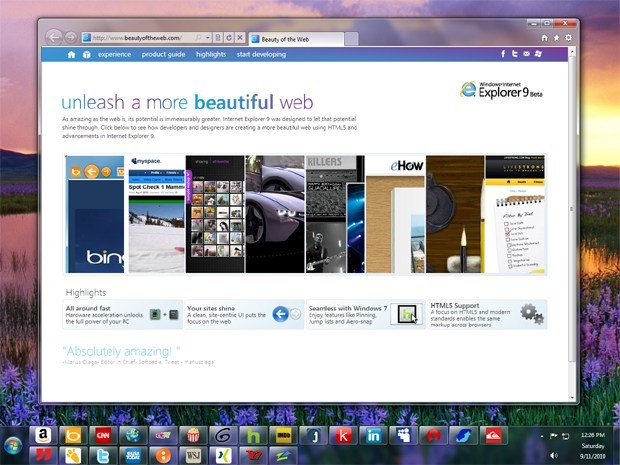 Update: Microsoft reached out to us via email saying that IE9 will run on either Windows 7 RTM or Service Pack 1. It seems like IE9 could come out earlier than next year, and won't actually require SP1 to work;

You can view the original article below:

Last week Microsoft released a public beta of its next generation web browser, Internet Explorer 9. The browser was met with great enthusiasm and received positive early reviews for a beta product. Microsoft has also been using some new, obscure feedback gathering mechanisms -- such as Reddit -- to let ordinary users have a say in the new browser.

Ars Technica is reporting that the final edition of Internet Explorer 9 will require Windows 7 Service Pack 1 to be installed, according to the IE9 Beta FAQ;

The FAQ also says that businesses should not hold back from deploying for it, and reassures that IE9 will integrate with Windows 7 flawlessly:

Should enterprises wait for Internet Explorer 9 before deploying Windows 7?

Microsoft continues to push that it's not essential for businesses to wait for SP1 and IE9, but to deploy now and roll out these updates later, when they are released. Microsoft explained on The Windows Blog why users shouldn't wait for SP1 or IE9 to upgrade.

This gives an estimate of when a final IE9 release is expected, since Windows 7 SP1 isn't due out until some time in the first half of 2011, but no specific date has been announced. A beta of Service Pack 1 is currently available.