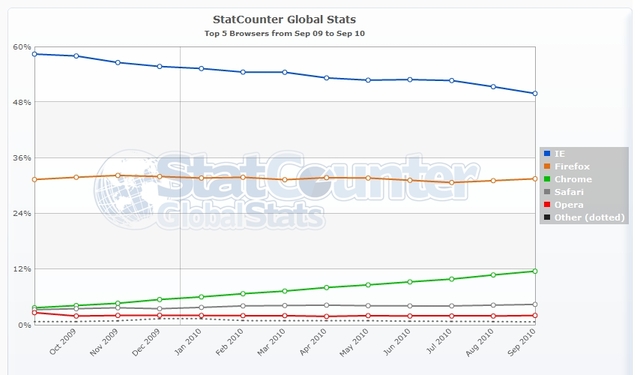 According to StatCounter (via NetworkWorld), Microsoft's Internet Explorer web browser had dipped below the 50% mark for worldwide market share. These September stats show a decline of 1.43% since last month, and a nearly 10% drop since last year. This contrasts Net Applications estimates that show IE holding closer to 60%. Either way, both sets of statistics agree that the once "King of Browsers" is still falling. With the beta release of Internet Explorer 9, Microsoft plans to change all of this. IE9 looks to be a promising solution for Microsoft, but its success will ultimately lie in whether or not it can regain the users that have gone astray. Merely getting users to upgrade from previous versions of IE will not help Microsoft's overall browser presence in the market.

Once upon a time (back in 2002), Internet Explorer commanded more than 90% of the worldwide browser market. In 2008, IE still maintained 67%. Times have definitely changed, and Microsoft now knows that bundling its browser with the world's most widely used operating system isn't a permanent safety net. In Europe, Microsoft had to add a ballot that allows users to choose which browser they'd like to run. This is showing to be factor in IE's continued decline.

Meanwhile, Mozilla's Firefox showed slight gains this month while Google's Chrome showed triple growth year-over-year. It will be interesting to see how the landscape shapes up in the coming months. IE9, Firefox 4, and further iterations of Chrome are all expected to go gold during this time.