Here at Neogamr, we really love playing a good pinball game. As it becomes harder to find physical tables to play on, we've switched our attention to the computerized versions, namely Pinball FX2. Now Silverball Studios is attempting to bring back one of the most popular pinball series of all time - Pro Pinball - and are starting a Kickstarter campaign to raise funds for the project. The goal is to raise $400,000 over the course of the next 30 days, and there are many different backing levels to choose from including one that gets your picture put on the backglass of a table!

We had a chance to interview Pat Lawlor, the mind behind some of the best pinball tables of all time, as well as Adrian Barritt, founder of Silverball Studios, to get some insight into the pinball world in general and their project in particular.

1) Pat, thank you for taking the time to answer some of our questions today. You're the mind behind two of the best pinball machines of all time, The Addams Family and The Twilight Zone. What do you think makes these tables so popular, even today?

Great question. Addams Family is a game that has defined modern pinball for more than 2 decades. It is still on the Play Meter ( Industry magazine ) top ten earning pinball machines. It has a timeless
mix of humor, nicely paced game play and a great set of instantly understandable toys. It catered to average people wanting to play a great pinball game rather than the hardcore fan base. It created
the dynamic game rules that almost every pinball after it has followed. That is " do something, start a MODE, do enough modes get a wizard mode, etc." Twilight Zone on the other hand is popular with the hardcore collector gamer type. It takes the rule set from Addams Family and puts it on steroids. It has a huge number of toys and a large playfield to accommodate them. In both cases the game theme is carried so that you get what you expect, and then some.

2) Traditional pinball machines in an arcade are physical devices that have tactile responses whereas computers don't have that same feel. Do you think that computer pinball games are better than the physical machines?

Not at all. I think that both variants bring different qualities to the game environment. And hopefully we can play to those strengths.

3) One of my favorite tables was Revenge from Mars because of the mix between physical and computerized play. What's your favorite table of all time, and why?

I too like Revenge from Mars. When George Gomez and myself were inventing Pinball 2000 (the platform that revenge is on ) we envisioned exactly the interactive seamless video/real game play.
Our intention was to get a new generation of players to TRY a pinball machine. Mechanical arcade pinball has needed an infusion of new players ( read younger ) for the last 15 years. It hasn't
happened. My favorite game of all time though is a Steve Ritchie game; High Speed. Part of the reason is due to it's use of theme to carry a simple rule set to an exciting conclusion. It's no coincidence that High Speed was programmed by Larry DeMar, who worked tirelessly on Addams Family and Twilight Zone.

4) With the death of the arcade, do you still see much of a market for new physical pinball machines?

I always laugh when that question is put that way. Even in their heyday, arcades were a comparatively small buyer of physical pinball machines. Most of physical pinball was operated on
the street, in bars, pubs, convenience stores, bowling alleys, etc. The death of the arcade is a milestone that shows other things. The growth of home video, the change ( here in America ) of
people not going out but staying in their home to entertain. The market for pinball machines that is left is almost totally people buying games for their recreation rooms at home, whether as collectors, or just as an accessory for their lifestyle.

5) How did you first get involved in this project and why did you decide to accept?

I got involved because the guys at Silverball Studios have an incredible physics engine to drive the pinball simulation. No one else, even after 15 years, has come as close to the real feel of the ball on wood. It's a difficult feat, and one to be admired. I accepted because I thought it would be fun to crank up an original game, and take on a new challenge.

Well, certainly one of the things that computer simulations allow you to do is invent wacky anti-gravity type stuff. But one of the things that drew me to this project is that the game we are going to
design, IT COULD BE BUILT AS A REAL GAME. That's not to say we won't be pushing the envelope on fun or features. There's a lot that you COULD do if you had the money in a real game that's never been attempted. So let's see where this takes us.

Check out our KickStarter page. I can promise something slightly outrageous! 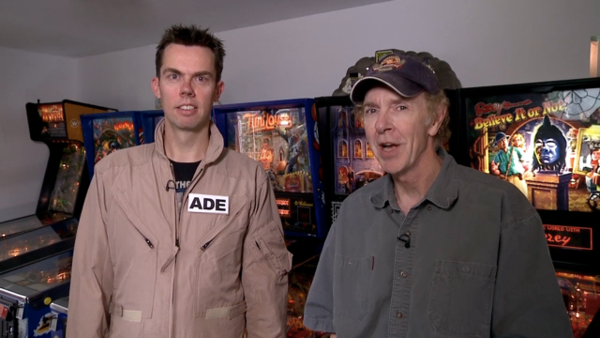 1) Thank you for taking the time to talk with us today, Adrian. What made you first decide to create the Pro Pinball series in 1995?

I originally came up with the idea of Pro Pinball in the mid nineties whilst working at Empire Interactive when Star Trek: The Next Generation had just been released. I was both a massive pinball
fan and Star Trek fan and I thought we could do a simulation of that excellent game for the PC. We tried to get the rights to do it but it was way too complicated and expensive, so we came up with
our own design for a table which was inspired by all the great Williams games that we coming out at that time This game eventually became Pro Pinball: The Web and set a new standard for pinball
simulations. We went on to make a total of four games under the Pro Pinball umbrella for platforms such as PC, PlayStation, Saturn, Mac and DreamCast.

2) Kickstarter has recently proven to be a great platform for game developers and has really helped gamers share ideas of what they want to see in a game. At this point, is the new pinball game already designed, or will fans still be able to help shape some of the features and designs of the project?

The game isn't designed yet. In fact we want to involve the backers right from the beginning. We will invite theme suggestions from all the backers and from that draw up a short list of themes. Backers
at $100 and above will then be able to vote on the theme we eventually go with. Beyond that we will be encouraging all backers to suggest features or ideas that would suit the theme. That said, Pat will have his hands on the reigns at all times and will have final say on what actually makes it in to the final game.

Our plan is to push the design to the limit, whilst still creating something that is true to physics and could be made for real one day. We have done games such as Mario Pinball Land and Metroid Prime Pinball which are a major departure from real pinball games and are fun in their own way, but this time we want to go back to our roots and create the most realistic and fun pinball simulation ever
seen.

4) Why do you think computerized pinball continues to be so popular?

This must be largely down to the fact that it's much harder to find real pinball to play this days. Regardless of that, pinball remains a great game of skill and luck so people will continue to seek out
great virtual pinball experiences.

5) We're big fans of the Pinball FX2 series. What differentiates your new project from that of the competitors?

There are three main areas I think we excel in:

6) It sounds like you're focusing on the PC and Mac (in addition to iOS for the mobile market). Why are you bypassing the console market?

That is indeed our initial focus. With Kickstarter you have to raise all the money you are asking for or you get nothing. This means we need to keep our plans as modest as possible to begin with, so we
are supporting the three platforms that we have so far had the most request for. However, we do intend to bring Pro Pinball to consoles too in the near furture. If we hit our target with time to spare
we will introduce stretch goals to bring support to platforms such as XBLA, PSN, Android and more. We are currently running a poll on our Facebook page to gauge which platforms our fans are most
interested in.

7) We'd love to have a Neowin.net/Neogamr.net themed pinball table. Is there any chance that one of the Kickstarter backing levels will let us give you ideas for a table that your company will then design and implement for us? :)

We'd also love to do a Neowin.net/Neogamr.net themed pinball table. However, I'm afraid with this initial project the pledge required would probably exceed Kickstarter's maximum reward level of
$10,000. That said, if our Kickstarter is a massive success thanks to your support, we might be able to come to an arrangement afterwards. ;-)

I really can't wait to get stuck into designing the new Pro Pinball game with Pat and can promise anyone who backs us, a game that will exceed all expectations.

As you can see, the team has already started work on the new project and have released a video showing how the pre-rendered lighting looks on the table. We're looking forward to watching this project and hope that they meet their goals to produce a top-quality pinball table on the PC.