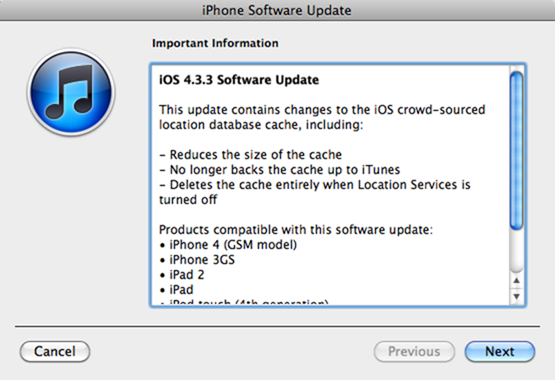 Apple has just released iOS 4.3.3 for all supported iDevices. The latest update addresses location cache bug that caused growing concerns with iPhone, and even Android and Windows Phone 7 users, that your cell phone was recording your location.

Apple later addressed these concerns by saying that the iPhone, iPod touch and even iPad location tracking was just saving your GPS location and hotspots to make finding your location faster. Your GPS and hotspots were even being recorded when you turned off location services.

Apple also claimed that they were only receiving anonymous data that was encrypted, and didn't link back to the users identity. The company quickly acted to address the issue by reducing the size of your cache file, and even disabling it completely when you turn off your location services.

The latest iOS update will work for: