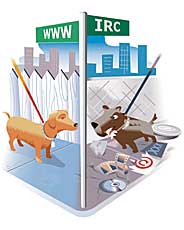 It was just another Wednesday on the sprawling Internet chat-room network known as I.R.C. In a room called Prime-Tyme-Movies, users offered free pirated downloads of "The Passion of the Christ'' and "Kill Bill Vol. 2.'' In the DDO-Matrix channel, illegal copies of Microsoft's Windows software and "Prince of Persia: The Sands of Time,'' an Xbox game, were ripe for downloading. In other chat rooms yesterday, whole albums of free MP3's were hawked with blaring capital letters. And in a far less obtrusive channel, a hacker may well have been checking his progress of hacking into the computers of unsuspecting Internet users.

Even as much of the Internet has come to resemble a pleasant, well-policed suburb, a little-known neighborhood known as Internet Relay Chat remains the Wild West. While copyright holders and law enforcement agencies take aim at their adversaries on Web sites and peer-to-peer file-sharing networks like Napster, I.R.C. remains the place where people with something to hide go to do business.

Probably no more than 500,000 people are using I.R.C. worldwide at any time, and many of them are engaged in legitimate activities, network administrators say. Yet that pirated copy of Microsoft Office or Norton Utilities that turns up on a home-burned CD-ROM may well have originated on I.R.C. And the Internet viruses and "denial of service'' attacks that periodically make news generally get their start there, too. This week, the network's chat rooms were abuzz with what seemed like informed chatter about the Sasser worm, which infected hundreds of thousands of computers over the weekend.