For the week of December 11th, Microsoft surpassed the 4 million unit sales mark for its Kinect sensor unit. If current sales trends continue, Microsoft will be on track to sell 6 million units before the year is through. This bodes extremely well for Microsoft's fledgling "gaming" technology and even more so for the potential that the technology holds.

Only 40% of all Kinect units sold have been bundled with Xbox 360 consoles. This means that existing Xbox customers are jumping on the motion bandwagon and scooping up the majority of Kinect units. In the same amount of time since launch, Nintendo only managed to sell 2.9 million units, while Sony is taking up the rear with a hair over 900 000 Move devices. It's too early to tell, but even with Nintendo's shortages, Kinect is outpacing both competitors at a good clip. 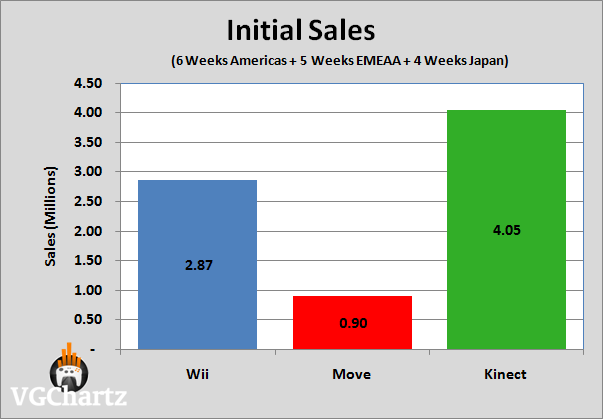 With so many units being sold in such a short time, and the pace expected to continue, the potential for Kinect hacking and development can only grow. Impressive demos have already hit the scene, and so much more could be heading down the pipe. Only time will tell just where this technology will lead. With rumours of motion controlled operating systems and even uses in the medical field, now is the time to start thinking more and more about combining augmented reality with motion control.