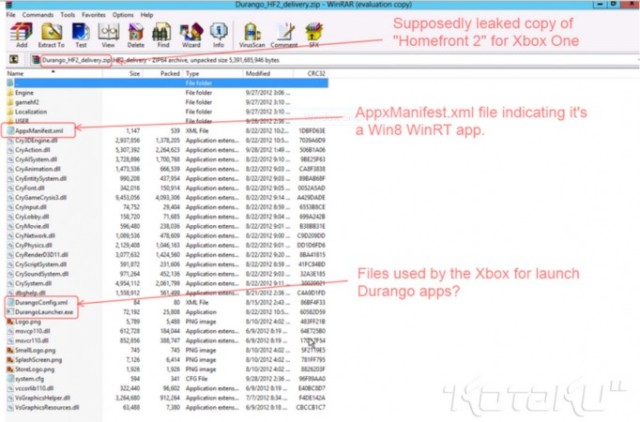 Xbox One game files leaked in February may have been showing us that the Xbox One is capable of running Windows RT apps all along. A screenshot of Homefront 2 files shows the launcher executable alongside a Windows RT AppsManifest.xml file.

It is not quite news that Xbox One games can be built as Windows 8 apps, and run on Windows as a platform, however today's revelation, highlighted by Justin Angel on Twitter, seems to have excited more developers who will find it even easier to port games, and make the most of the Xbox One's recently announced self-publishing platform. Microsoft first hinted at support for Windows 8 apps at Build 2013:

If you want to know about how to get a head start about thinking about developing for Xbox One, the logical thing to do is go build Windows 8 applications.

While screenshots like these can be forged, the original source, SuperDaE, has previously been reliable when handling similar leaks. The screenshots first came from Kotaku, who spoke to this hacker, responsible for detailing developers' secret operations. He has since been chased down by police, and has refused to corporate with the authorities.

The Xbox One has been under much controversy since its launch, as Microsoft have been forced to backtrack on certain policies, and rumours suggest games will be 50% less powerful than PlayStation 4 games. The launch is expected by the end of this year, so we must now sit keenly in anticipation until then.