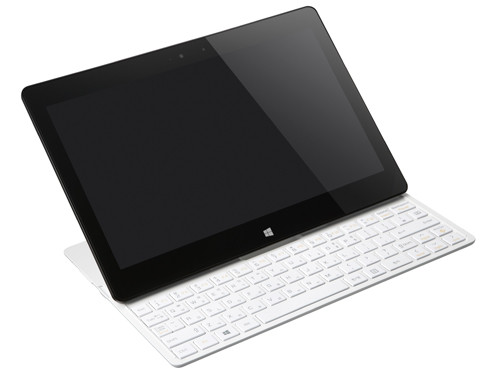 CES 2014 gets underway in Las Vegas next week, but LG is jumping the gun a bit and revealing a little information about some of the products it will show off at the massive electronics trade show, including some new Windows 8.1 PCs.

LG's press release reveals that one of them will be the Tab-Book2 (shown above), the next version of its hybrid notebook-tablet; the first version was part of LG's initial Windows 8 product launch in 2012. The new Tab-Book2 has an 11.6 inch touchscreen that slides up to reveal the keyboard. One of the models weighs in at 2.3 pounds while the other is just over 2 pounds. Both versions have an Intel Core i5 processor.

LG will also promote a full 13.3 inch notebook, the 13Z940 Ultra PC, that weighs 2.1 pounds and has an Intel Core i5 chip. It will come with either a 128 or 256GB SSD for storage. LG adds, "The Ultra PC features Reader Mode, allowing the user to alter the background of any onscreen image to resemble paper, reducing eye-strain and energy consumption."

Finally, LG will show their new all-in-one PC at CES, with a 27 inch screen and the ability to switch from television mode to Windows 8.1 without having to reboot the computer. More hardware details as well as pricing for all of these models are expected to be announced next week.