The COVID-19 pandemic has forced many people to wear masks in most social situations for obvious reasons, so today, LG announced that it's capitalizing on that need with a new kind of face mask. Officially called the PuriCare Wearable Air Purifier, the mask promises to filter the air users take in, while interfering as little as possible with their breathing patterns.

The PuriCare Wearable Air Purifier uses two H13 HEPA filters, which are similar to the filters LG uses in its air purifiers for the home, and they can be replaced when needed. The mask also has a set of two fans inside, and they can adjust their speed between three different levels so as to make breathing more natural. They'll speed up to let more air in, and slow down to offer less resistance when exhaling. 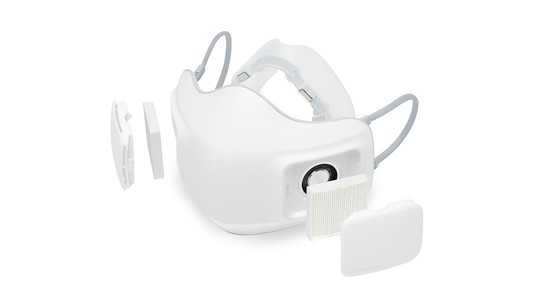 Being an electronic device, naturally, it needs to be charged, and LG says the battery should last two hours on high mode and eight hours on low mode, presumably referring to the fan speed. It comes with a charging case, and there's a UV light in the case that kills harmful germs that may be stuck on the mask. Plus, the case can detect when the filters inside the mask need to be replaced, and through the LG ThinQ smartphone app, let users know about it.

One of the concerns people tend to have with face masks is comfort, and LG says it designed PuriCare to fit comfortably on user's faces without air leaking out, and the company says it's comfortable enough to wear for hours on end. Of course, as far as looks go, if a regular face mask felt obtrusive, this one is likely to be even more so.

The PuriCare Wearable Air Purifier will be shown off at LG's virtual IFA 2020 exhibition, and it's planned for the fourth quarter of the year. It's not yet clear how much it will cost.