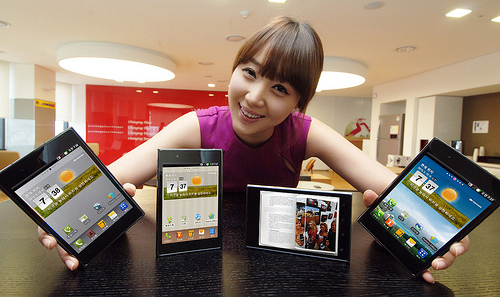 Bigger is better, at least that seems to be the theme lately for smartphones. Samsung has generated a lot of attention with its Galaxy Note with its 5.3 inch screen (it is now officially on sale in the US via AT&T) and now LG is trying to do the same with today's official announcement of the Optimus Vu. The smartphone, which uses Android 2.3, has a huge 5-inch screen which has been set up in a 4:3 aspect ratio.

LG has previous teased the existence of the Optimus Vu but today comes the full reveal of the huge phone. The hardware inside is pretty good, too: it has a 1.5 GHz dual-core processor from Qualcomm, 32 GB of storage space, an 8 megapixel rear camera, a front facing camera, an HDMI port (for those of you who think a 5-inch smartphone screen is still too small) and is just 8.5 mm thick. It can also support the faster LTE networks.

If you are put off by the fact that the LG Optimus Vu is still running the older Android 2.3, LG has promised that the smartphone will be getting an Android 4.0 upgrade at some point. The device is scheduled to go on sale in Korea in March but there's no word when the smartphone will make its Western debut.