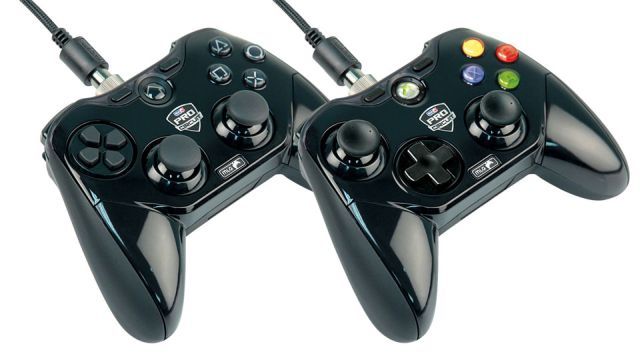 Major League Gaming is the biggest pro gaming tournament organization in the US. The group has managed to survive the shutdown of several of its rivals over the past few years and its live events all over the country not only bring in pro gamers and sponsors but also thousands of fans. This week, the group announced it is teaming up with game peripheral maker mad Catz to release official Major League Gaming console controllers.

Mad Catz's offical web site has more info about the controllers which include both gamepads as well as controllers made specifically for fighting games. The Major League Gaming Pro-Circuit Controller is being made for both Microsoft's Xbox 360 console and Sony's Playstation 3 console. Both versions of the gamepad allow components to be switched around to the player's wishes. The analog thumbstick and the D-Pad can be switched around and Mad Catz will also offer alternate versions of both in different styles, colors and more. The faceplate of the controller can also be removed and replaced with different art styles and the controller's cable can also be detached for better storage and transport.

Mad Catz and Major League Gaming are also planning to release a Arcade FightStick Tournament Edition for fighting game players. The big game pad has a large joystick and eight big buttons on top of a big controller case. The FightStick is now available for pre-order for $159.99. The Pro-Circuit Controller doesn't have a price point yet but is expected to be released before the end of 2011.