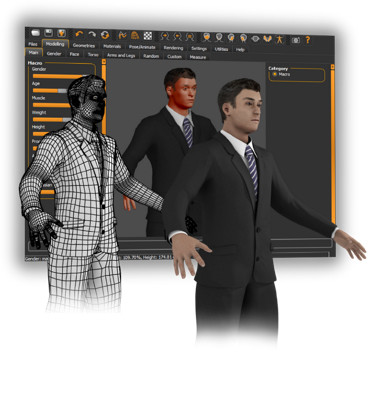 MakeHuman is a tool designed to simplify the creation of virtual humans using a Graphical User Interface, also commonly referred to as a GUI. This is a specialized branch of the more general subject of 3D modelling. The MakeHuman Team is focused on this specific branch of the broader subject in order to achieve the best possible level of quality and ease of use in that area. The ultimate goal is to be able to quickly produce a wide array of realistic virtual humans with only a few clicks of the mouse and be able to render or export them for use in other projects. Makehuman is released under an Open Source Licence (AGPL) and is available for Windows, Mac OS X and Linux.

MakeHuman is the free and open source software to create realistic 3d humans for:

The virtual human is ready to export in external 3d software (Blender, XSI, Max,...) or to quick render with the internal engine.