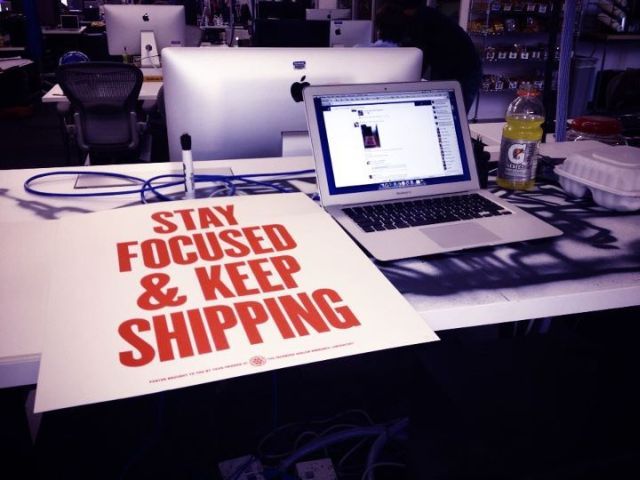 Mark Zuckerberg is a very rich man, no doubt about it. With the upcoming launch of the IPO for his company Facebook, he could get even more money. However, he still likes to work close to his employees if a new image posted on his Facebook page is any indication.

The image's main focus is on a sign that says "Stay Focused & Keep Shipping". That's a clear message to the team members at Facebook to not become distracted with all of the attention the IPO is sure to generate. Even though a number of its employees, who also have stock options in the company, could become paper millionaires when the stock goes public later this year, the emphasis is simply to work on Facebook's services.

Other interesting bits about the picture include all the Apple products in the office (oddly enough, Microsoft has invested over $240 million in Facebook) and the fact that Zuckerberg drinks Gatorade at his desk. We hope he is careful not to spill his drink all over his workspace. Finally, what's inside that container on the desk that looks like it holds some leftover food from the local Applebees?  We will never know.