Twitter recently released all of the DMCA takedown notices they have received in the past year. According to the Hollywood Reporter, the 4,410 claims reveal that a single studio, Magnolia Pictures, was responsible for a third of them.

Magnolia Pictures sent out a staggering 1,466 takedown notices to Twitter last year, mostly to remove links to pirated copies of their films, which include classics ranging from Yo-Yo Girl Cop to last year's Melancholia.

The Digital Millennium Copyright Act (DMCA) lays out a takedown process that all websites have to comply with, or else face legal retaliation.

Magnolia relies on Web Sheriff, a tiny UK operation that handles online copyright issues for more content providers than you can shake a stick at. The company's founder, the Web Sheriff himself, John Giacobbi said Twitter doesn't make the process easy for him.

“They naturally have takedown procedures, but they don't as yet offer removal tools. This is unfortunate as many other sites do now offer these facilities to major rights owners and leading agents and, for the time being, Twitter's current process is too basic and too clunky." In other words, Twitter doesn't give studios the ability to remove sites without Twitter checking to see if the content actually needs to be taken down. 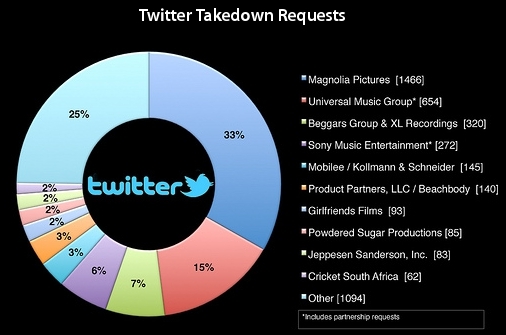 Twitter has recently relaxed its stance on political censorship, letting foreign governments do more policing of what can be seen on the microblogging service in their country. Twitter does promise to forward any tweets that get removed by governments to Chilling Effects, a website that collects DMCA notices from lots of popular websites, but that's not doing much to please opponents.

The fact is that this really isn't anything new for Twitter, or any other site. By allowing government regulation, at least Twitter can exist in those territories - it's already being regulated, anyway. Under current laws, content creators have the ability to regulate pretty much anything that's published online, regardless of whether it's the real piracy that such legislation was enacted to protect against, or just a tape of a concert that's lovingly shared by fans. While some regulation probably is for the best, it still needs to take into account what the purpose of the 'infringing' media actually is; right now there's no distinction between real threats to business and harmless fandom.