We previously covered Max and the Magic Marker on Windows Phone 7, but the iPad version which was released just a couple of days ago is even better when played on the large touch screen. Max has a new publisher in the form of EA Mobile, but the mainstay of the title remains much the same.

Max plays like a classic platformer but with a twist. You have a magic marker that enables you to draw freehand in the game – everything you draw becomes real and can be interacted within the game world and you must help Max overcome enemies, obstacles, and puzzles on his journey. This game is for all audiences yet still great fun while remaining challenging for the hardcore gamer. 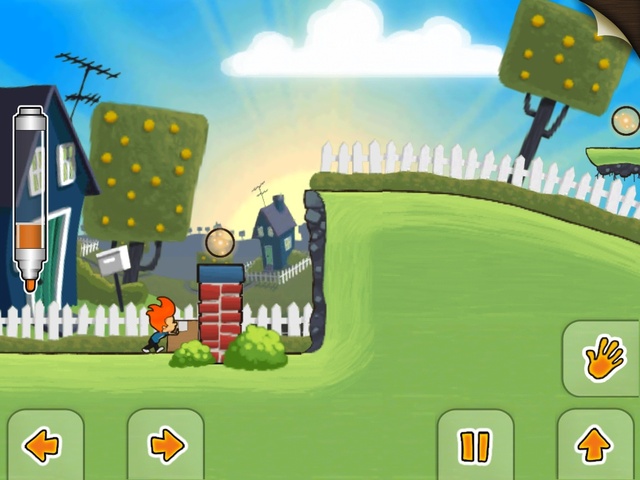 FUN FOR ALL AGES! One day Max gets a mysterious marker in the mail. The first thing he draws is a monster. As soon as the pen leaves the paper, the monster comes to life and jumps into another drawing. Oh no, it must be stopped! Max draws himself onto the page and the chase begins. Welcome to Max & the Magic Marker, an award-winning physics-based puzzle platformer that plays like a classic - but with a twist!

LET THE DRAWING BEGIN!  You have a magic marker that enables you to draw freehand in the game – everything you draw becomes a real, interactive object within the game world. Master Max’s extraordinary talent and help him overcome enemies, obstacles and puzzles!

FROM SWEET HOME TO A ROBOT FACTORY  This innovative game features 58 awesome levels in 3 unique worlds, rendered in stunning HD-quality graphics. Match wits with oodles of puzzles, each offering multiple solutions. Solve them all and earn loads of achievements!

DON’T RUN OUT OF INK!  Collect ink and numerous golden spheres, and if you’re feeling keen, find each elusive black sphere. Overcome the obstacles as quick as you can, and find a way to the evil monster who wants to damage Max's drawings.

Max may look like it'll be quite an easy game from the screenshots, but don't let it fool you as it gets harder and harder the further into the game you get. Drawing with your marker on the screen can be done as you play or you can pause the game as you go, when you pause the game the screens graphics change to a pastel style, which looks great. Drawing is simple, you put your finger on the screen and draw out whatever you want, maybe you want to create a platform up to a bonus item or a squiggle that can drop from the sky to catapult you over to another section. It all works perfectly. 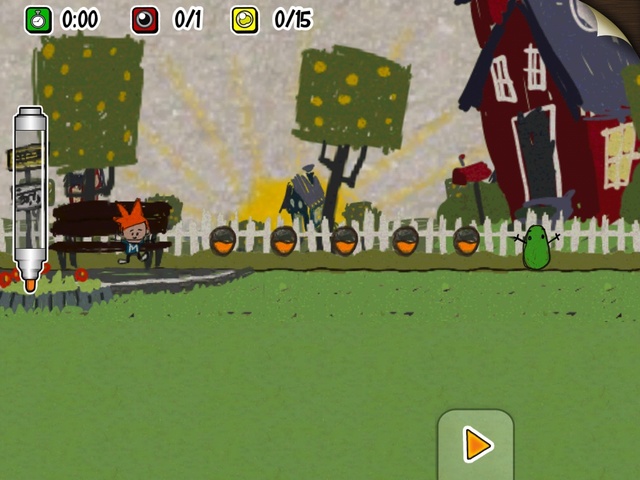 One of the most impressive parts of Max and the Magic Marker are the controls. Controlling platforms games on a lot of mobile devices has become a chore and they are never as easy as they should be, well the developers (Press Play) seem to have got it spot on from the sensitivity to the ease of jumping and drawing on the screen, it all just works perfectly and is never frustrating.

Graphically the game looks charming on the large iPad screen, it is full of color and has a great art design about it, while the improvements over the previous handheld version seen on Windows Phone 7 devices is instantly clear. Firstly the game runs a lot smoother with a far better framerate on show, which not only looks better, but also makes the game a little easier to control. Secondly the bump up in resolution really makes a difference thanks to the art work and design. 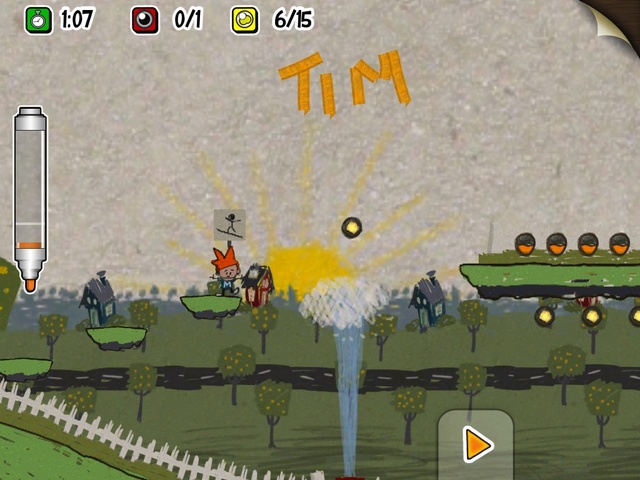 Pleasingly the load times are far shorter than they were with the Windows Phone 7 version of the game, with levels loading up in a few seconds, which means that you are able to pick up and play whenever you want to without worrying. The sound is good even if the music can become a little repetitive at times, but as usual with most iPad titles, sound is better when through headphones rather than the built in speaker.

So once again this is an excellent version of an already great game. The iPad version is the best one I have played and has been priced reasonably by EA Mobile. The only thing it lacks is Game Center achievements rather than the plain built in ones, but don’t let that put you off as you will be missing out on an excellent title