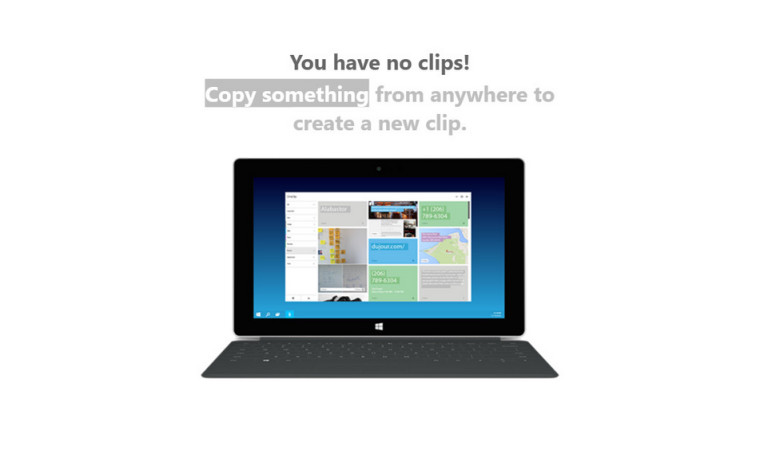 OneClip is an internal, cross-platform app developed by Microsoft that wants to be a universal clipboard for all of your devices. Though not yet publicly released, the app runs on Windows 10 desktop and mobile, Android and iOS.

Note taking apps like OneNote and Evernote typically offer some functionality when it comes to quickly organizing screenshots, copied text and so on. But OneClip takes that concept and runs with it, across all platforms, with near instantaneous syncing.

Once you install OneClip on a device, like a Windows 10 PC, the app starts to collect everything you copy to your clipboard. Images, text, screenshots, links and so on, all get collected and organized by time and date, device, app and so forth. Then they get displayed in a neat easy to use interface, from where users can then share the content, pin it as important, or simply delete it.

You can also have all of your notes, pins, screenshots and so on move around with you on any device, by registering devices with a code issued when you launch the app. For example, you can have your desktop, laptop and iPhone all synced together so all of the display the same saved content. In fact this behavior wasisbaked into the app from the start as the launch notes explain:

With Oneclip, it’s easy to get back to the stuff you’ve seen and used. It might be a photo you took, a screenshot you made, a phone number or address you copied on your PC (and really really need now while you’re on the run) or just an important piece of text. OneClip makes this available to you automatically, on your behalf, on all your devices. A cross device, secure, intelligent clipboard in the cloud. Why didn’t anyone think of this earlier?

We got the chance to try out this app earlier today and so far it looks very clean, works very fast and could be surprisingly useful. For example, pressing the Print Screen button on our PC saved a screenshot that instantly showed up on our phone. It can also sort your content in a number of ways depending on date, device, type of content, app from whence it came and so on. The app also features a sort of minimized mode in which it only displays a small prompt where users get quick access to features like copy, pin, share and delete for a much more fluid workflow.

Of course if you're worried about privacy you can set OneClip to ignore certain apps. By default, it knows not to copy anything out of password managers like LastPass, MetroPass and so on. You can manually add to that list any app that's installed on your device.

It will be interesting to see when the app gets officially launched and whether it will sport any other new features. So far, in our limited use, OneClip is working well and we can see how this app will be a useful addition to the company's suite of productivity apps.

Thanks for the tip H0x0d!