The tablet, the first to run Google's latest Android update dubbed "Honeycomb" which focuses on bringing Android to the tablet, will be called the Motorola XOOM and features a 10.1" screen, has a dual-core processor and is 4G LTE upgradable. It's expected to be shown any minute at the company's CES 2011 press event, with a press release leaking before the event.

The release also reveals that the company has partnered with companies including Adobe, WeatherBug, QuickOffice and publishing giant Conde Nast to create applications for the tablet, whose large screen provides an all-new way to view Android applications which are traditionally targeted towards mobile phones with smaller screens.

"Conde Nast is excited to utilize the advanced form factor of the Motorola XOOM to bring our popular magazines to readers,” Charles Townsend, CEO of Conde Nast said in a statement. “In addition, our all access everywhere model means that our subscribers, in addition to their XOOM, can also enjoy content from the web or in print."

Adobe meanwhile has confirmed the device will support Adobe Flash -- a key criticism against rivals such as the iPad that don't support the technology.

"We are excited about full web browsing on the Motorola XOOM through its support for Flash and HTML content. Our partnership with Motorola continues to grow with the introduction of these innovative devices, and we look forward to seeing our developers bring rich, new content experiences to them using our suite of tools.”

A video of the Honeycomb operating system leaked onto the internet earlier today, although Google is yet to officially announce the upgrade. 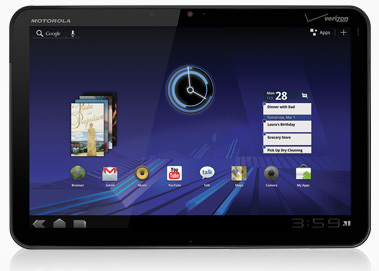