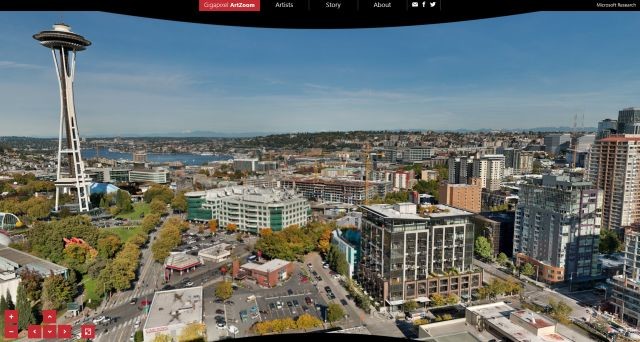 Microsoft's Photosynth technology allows anyone to merge a number of 2D photographs together to create an impressive looking panoramic image. Now that same technology has been used to create a new 360 degree look at the city of Seattle made from merging 2,368 separate 22 megapixel images to form one 20 gigapixel panorama.

The Gigapixel ArtZoom website shows the result of this effort by Microsoft Research. The team found a rooftop on a condominium in downtown Seattle from which to take the pictures for the overall panorama in October 2013. The images were all taken with a Canon digital SLR camera that had a professional 400 mm lens. The team also used a Gigapan robotic tripod head.

Additional photos were taken from the same location, but this time they were aimed at specific subjects, naming a number of artists and performers who work in the Seattle area. When users zoom into a specific location in the panorama website, a pop up message might show up in the corner that offers more information on a specific artist.

Microsoft used both its Photosynth and its Image Composite Editor software to create the final 360 look at Seattle. They also made a two part behind the scenes video of the making of this project which can been watched on Microsoft's YouTube channel.