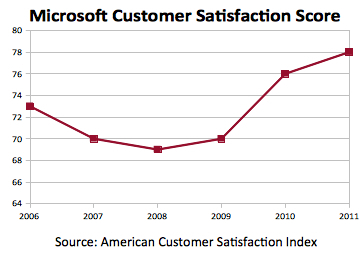 Microsoft has been working hard to create top tier products that are well received from its consumers. After fumbling with Vista, Microsoft continues to climb in its customer satisfaction rating.

The rating information comes from American Customer Satisfaction Index (via Geekwire.com) and shows Microsoft's upward trend in the consumer marketplace. While a positive image does not necessarily result in more sales, a happy consumer is more likely to be a return shopper in the future.

Microsoft received a 78 on the 100 point scale which was up from a low of 69 in 2008. The recovery in customer satisfaction is directly related to consumer satisfaction with Windows 7, this OS from Microsoft has been a home run in user satisfaction and stability. Many corporations are jumping the Vista gap in favor of Windows 7 too. This is the third straight year for a gain in satisfaction for Microsoft, a trend that they surely hope will continue into next year; Apple's rating has yet to be released.

Microsoft is currently developing the follow up platform to Windows 7, Windows 8. While the official release date of the OS has not been announced, there have been several build leaks to date and it is expected that the OS will launch in late 2012.