There have been some pretty decent offers available on the Xbox One in the UK in recent months - but you'll have to go all the way back to September to find the last official price cut, when Microsoft UK dropped the price of the console from £349.99 to £329.99.

Today, Microsoft's Graeme Boyd (social marketing manager for Europe, the Middle East and Africa) said on Twitter that the "Xbox One now starts from £299.99 in [the] UK", which suggests that Microsoft has finally got around to reducing the entry-level price of the console again.

Not upgraded yet? Xbox One now starts from £299.99 in UK, plus great value retailer offers around. The time is now! pic.twitter.com/x6IG6J8qxL

However, while the tweet and its accompanying image imply that this is a permanent price reduction - with no hint of it being a short-term offer - Boyd referred to it in a further tweet as a "UK only retail promotion", so it may well be more temporary than it first appears. 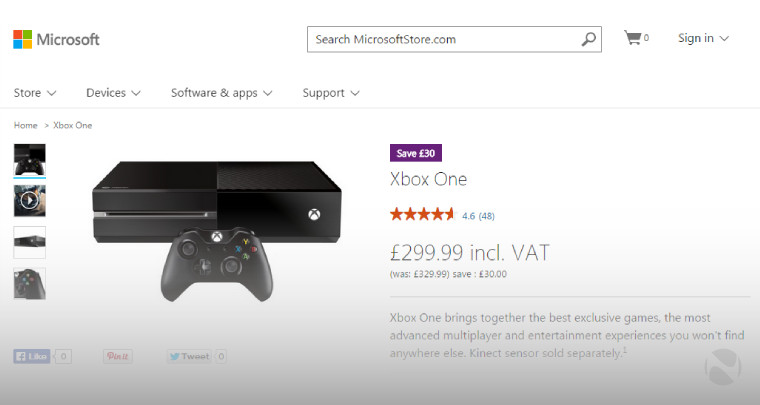 And unlike the last time the company dropped the price of the Xbox One - when it simply changed the base price of the console without any fanfare - the Microsoft Store listing now carries a "save £30" tag along with the lower price, which could be construed as further evidence that this is a short-term price cut.

But as Boyd also notes, there are plenty of other offers out there that provide even greater value - including one on Microsoft's own Store. For £299.99, you can buy the basic Kinect-free console on its own; or, for the same price, you can get the Xbox One with Halo: The Master Chief Collection - saving you £50 on the regular price of that bundle.