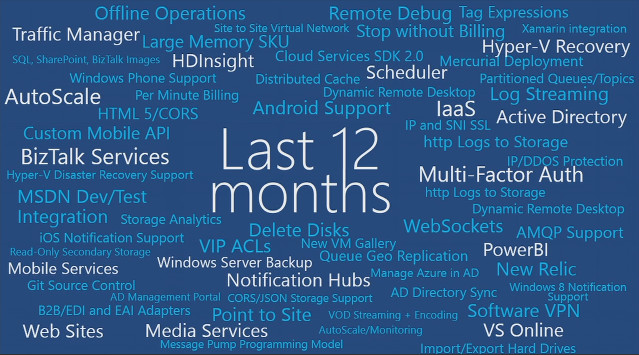 New features brought to Azure in the last 12 months

Microsoft's Azure platform is growing at an impressive rate and during the last earnings call, Microsoft said that Azure revenue grew over 150% when compared to the prior year. With this growth rate and Microsoft's continued investment into the platform, it's no surprise that the service is expected to be the largest on the planet by the end of the year.

Nomura Securities analyst Rick Sherlund is on-board with Microsoft's cloud and thinks it will have a $5.77 billion yearly run-rate which would make it the largest cloud service on the planet in terms of revenue. Salesforce is expected to not be far behind, in second place, with a $5.5 billion run rate.

Microsoft knows that Azure is the company's future and they are throwing everything they have to increase the performance, both through the creation of new data centers, and by adding features and continuously updating the platform. Back at WPC 14, Microsoft presented some impressive stats about the service:

While Microsoft may have missed on some platforms, like mobile, there is no doubt that they got it right when it comes to the cloud. Satya Nadella, who is now the CEO of Microsoft, was part of the team that made Azure such a huge success and this is likely part of the reason he got the top job at the company.

With the new machine learning features of Azure, Microsoft is forging ahead into new territory and is cementing the fact that they will be the market leaders when it comes to cloud-based services.

Update:  We should point out that the 5.5B number is made up of several products that use the cloud, although the revenue may not be associated directly to Azure. Amazon wanted to make this point known as it muddles up the comparisons between Amazon's service and Microsoft's about who really has the largest cloud.