Now we realize this information is a bit dated as the incorporation happened back March but it is clearly for a Microsoft retail location. While this does not give us any insight in to when the stores will open, this is the first step toward being able to legally do so in that country.

In a conversation with Mary Jo Foley, she pointed out that Microsoft typically makes store related announcements at the World Wide Partner conference which is happening in July in Toronto.

As Michael Gillett stated on Twitter, you would think that Microsoft would want a store open in that region before the launch of Surface but as of now, the company has not made any official statements on its UK retail locations.

While we still do not have a lot to go on, for those of you who are in the UK, Microsoft is one legal step closer to opening a new store in that market. Hopefully next month Microsoft will provide a better light on its international plans, but until then, this is all we have, for now. 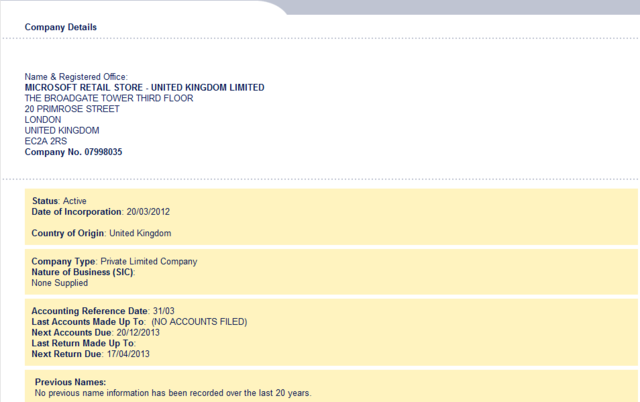 Thanks for the tip KibosJ!