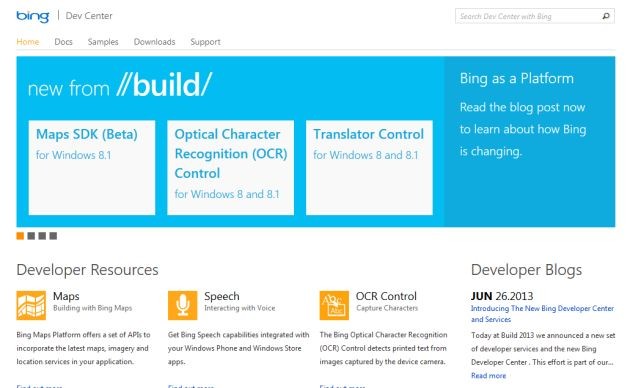 As part of today's BUILD 2013 festivities, Microsoft launched a new effort to give Windows 8 app developers a better way to access the software and APIs that the Bing team have been creating over the past few years.

One of these efforts is the new Bing Development Center, a website designed to give app makers quick access to anything that Microsoft has in terms of its Bing features. That includes the use of interfaces that involve voice, translation software and more.

The program will also allow for app access to Bing's web database with the new Bing Entity API. In a post on Microsoft's Bing blog it states:

We think knowledge is more than just a “graph”. It requires combining the web’s deep sets of information with insights derived from understanding the people, places, things, and actions in the real world. The Bing Entity API allows developers to create applications using this understanding to build scenarios that augment users’ abilities to discover and interact with their world faster and more easily than they can do today.

The new Bing developer program will allow apps to have deeper access to Microsoft's Bing Maps, including the upcoming support for Bing's 3D maps.