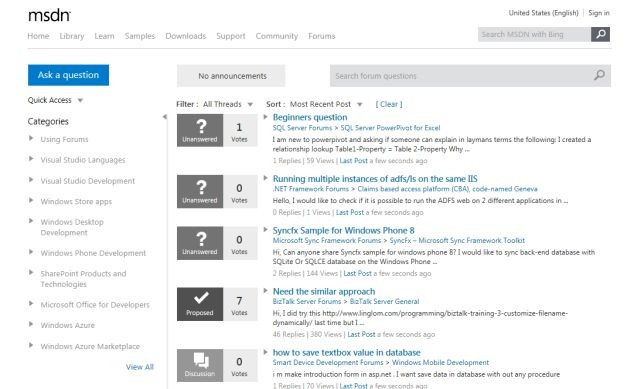 Even in this age of Facebook and Twitter, good old fashioned message board forums are still being used by a wide audience to not only help with questions but to also foster an online community. Here at Neowin, we just finished an upgrade for our own forums.

On Tuesday, Microsoft announced that its developer-themed MSDN forums had received its own upgrades with a number of new features. In a blog post, Microsoft's Brian Henry revealed just what has been added or changed.

Henry says that searching for items in the MSDN forums should be easier, stating, "Instead of navigating categories to find those that might be relevant, we’ve started with search as the entry.  You can search directly from the root and get results immediately.  The categories show up on the right hand side allowing you to filter your results."

If a person comes to an MSDN thread via an outside search engine like Bing or Google, the search string that was used is now automatically sent to the internal forums search engine so people can quickly find related message board threads.

Previews of message content threads have now been added to the forums and there are new indicators in place for private forums. Microsoft has also added a way for forum users to vote for what they think is abusive content in the message boards.