Microsoft's Socl social networking service was first revealed over two years ago with the name Tulalip, In December 2011, Microsoft officially announced the network, with the  new name Socl  and started by signing up a limited number of users. In May 2012, Microsoft allowed anyone to check out the Socl network and has been adding new features ever since. 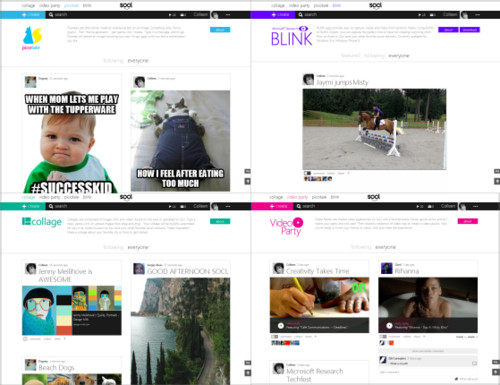 On Tuesday, Microsoft added some more new features, including some that will either delight users or make them scratch their heads. One of them is called Picotales; it's basically an Internet meme generator that quickly adds some text to a picture.

Socl has also added support for Blink, the recently launched Windows Phone 8 photo app. When connected to a Socl account, the Blink app can be used to take animated images and post them on a Socl page. Microsoft has also revamped the Socl website UI so that it has its own user interface when viewed on a mobile device like a smartphone.

Yet another new feature is Video Party, which will let users create a quick video playlist they can share with their friends on the network. Finally, the Collage feature has been updated so that users can now upload their own images, rather than just find those images on the Internet.

So far, Microsoft has yet to offer any information on just how many people have signed up to use the Socl service.