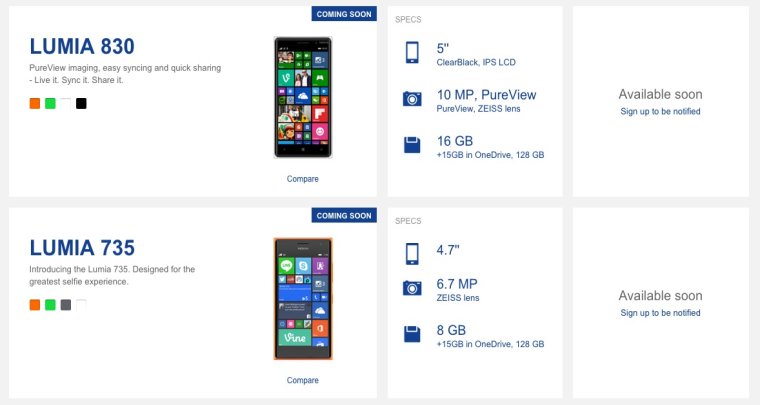 At IFA this year, Nokia announced a plethora of new phones and peripherals but for those of you in the US, details about availability have been slim. While we have been saying for a few weeks that the Lumia 830 would be headed to AT&T, Nokia has updated their webpage to show that the Lumia 735 and Lumia 830 will be heading to the US.

Unfortunately, that's about all that we know as there is no further information about where or when these devices will arrive on US carriers.

AT&T's lineup is getting a bit stale and is due for a refresh; it seems to make sense that they would get at least one of these new devices. Nokia's website lists both of the phones but they do not have the specs up yet which means we can't peek at the supported radio bands to figure out which carriers these phones are destined to join.

Other whispers have said that one of these devices may be headed to Verizon too and seeing that they recently landed the HTC One M8 for Windows, they could be looking at a new lower priced Windows Phone.

If you are curious and want to learn more about the availability of these devices, you can head over to the source link below and enter your email address.

We have reached out to Nokia to see if they are willing to comment on which carriers these phones will be headed too but our guess is that they are waiting for the vendors to announce availability.