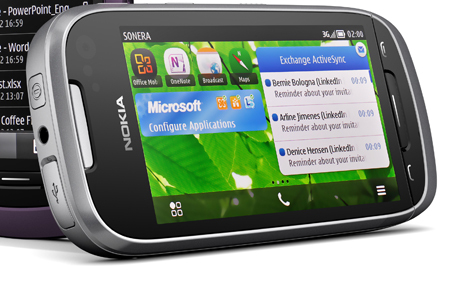 In February, Nokia announced plans to release a version of Microsoft Office for a number of its smartphones running on its Symbian (also known as Belle) operating system. Today, the company announced that Microsoft Word, Excel and PowerPoint are now available to download for the Nokia 701, Nokia 700, Nokia 603, Nokia E7, Nokia X7, Nokia C7, Nokia Oro, and Nokia C6-01 devices.

The software suite can be downloaded by hooking up those smartphones to a PC and connecting to the Nokia Suite program or by using the smartphone's Nokia Software Update tool. The Microsoft Office apps will also be made available from the Nokia Store in a few weeks.

Microsoft Office will also be released for the Nokia N8, Nokia E6 and Nokia 500 devices at an unnamed later date. In addition, the upcoming Nokia 808 PureView phone, with its 41 megapixel camera, will have Microsoft Office software installed when it goes on sale in Europe and other parts of the world (but not the US) later this year.

This is the first time that the full suite of Microsoft Office apps have been made available for a mobile phone platform outside of Microsoft's own Windows Phone operating system (the OneNote app has been available on the iPhone for several months). There have been rumors that Microsoft is working on a plan to release Microsoft Office for Apple's iPad but so far those plans have not been confirmed.