Microsoft doesn't release a lot of Windows 10 Insider Preview builds on Tuesdays, but today, it released build 17728 to the Fast ring. The build is quite significant, since it will include a feature that was announced at Build and we've heard almost nothing about since, Your Phone.

Your Phone, if it's not obvious, connects to your phone, allowing you to make calls, send and receive messages, and more. You can even interact with your photo gallery. Unfortunately, some of the features are limited on iOS devices.

You love your phone. So does your PC. 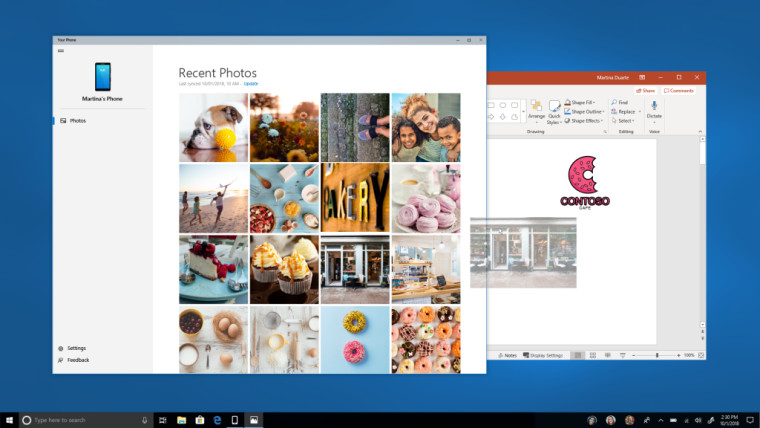 Coming soon, we’re bringing the first set of features to Your Phone app for Windows Insiders with an Android device. Snap a pic on your Android, see it on your PC. You can finally stop emailing yourself photos. With Your Phone app, your Android’s most recent photos sync to your PC automatically. Need to add a photo to your presentation? Want to spruce up that selfie with some Windows Ink action? Just drag and drop.

To light up this experience, open Your Phone app. You will receive an app from Microsoft which you must download to your mobile phone and follow the setup prompts. Android 7.0 and above are compatible with Your Phone app. For PCs tied to the China region, Your Phone app services will be enabled in the future.

For iPhone users, Your Phone app helps you to link your phone to your PC. Surf the web on your phone, then send the webpage instantly to your computer to pick up where you left off to continue what you’re doing–read, watch, or browse with all the benefits of a bigger screen. With a linked phone, continuing on your PC is one share away.

From Joe Belfiore’s blog post on Microsoft 365, check out what we’ve got in store for you in a future WIP release. We’re working hard to bring these experiences forward soon.

We have made the following changes and improvements:

Your Phone is a feature that has been much anticipated since it was announced back in May. It only made it worse that there's been no word about it since, with some speculating that it might be delayed until the next feature update, which is codenamed 19H1. This build seems to be laying the groundwork for it, and a switch will be flipped to turn it on soon.

This should be among the last major new features to arrive in Redstone 5. It's been moved from RS_PRERELEASE to RS5_RELEASE, which means that development is winding down.