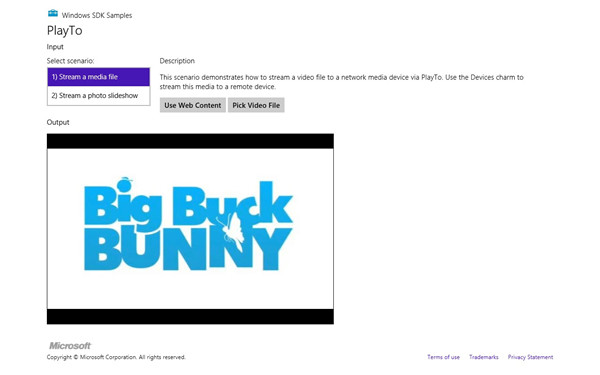 Windows 8 may be out in the wild now, but that doesn't mean Microsoft is done offering tips to developers who want to make Windows 8 apps. Today, the company updated its Windows 8 app developer blog with some help on how app makers can use the Play To contract in their software creations.

The blog post says the Play To feature "...allows you to stream music, photos and videos from apps to Xbox and other supported devices on your home network." For example, the Play To contract can be used to stream a video to a big screen TV from a Windows 8 tablet. It can also be used to offer a "second screen" for content that already running on another device. The Xbox SmartGlass app is an example of the latter category.

A Windows 8 device can enable Sharing in their settings and any supported Play To device on a person's home network is automatically linked to the Windows 8 product. A Windows 8 app, such as the video example Big Buck Bunny, can be programmed with the Play To contract and then the video can then be shown on any device that is wirelessly linked to the Windows 8 device. Microsoft offers up some sample code to get app developers started on that process.

Even websites can be made to work with the Windows 8 Play To contract via Internet Explorer 10. Microsoft says, "IE tries to identify the best media item to use as the Play To source, however, it favors elements that are currently playing, selected, in-focus, and actively in view. Music and video elements that are 5 seconds or fewer, and images that are 300x300 pixels or smaller, are ignored by IE and never automatically enabled."