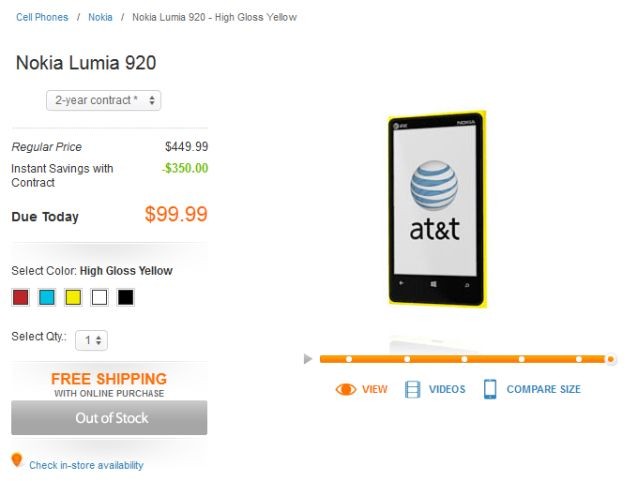 You may remember that when Nokia launched the Lumia 900 via AT&T in April, it was tough for AT&T to keep the Windows Phone 7.5 in stock for a few weeks. It now seems that history is repeating itself with the launch earlier this month of the new Lumia 920 smartphone.

A quick check on AT&T's website shows that the red, yellow and cyan models of the Lumia 920 are currently out of stock via AT&T's own website. In the Greenville, SC area, those models are also not showing up as being available for sale in local AT&T stores.

The white and black models of the Lumia 920 are listed as being in stock and are also available in some local stores. So it seems to be clear that finding a model with some color could be hard for a little while, and we suspect that will continue during the busy holiday shopping season.

WPCentral.com also reports that the yellow Lumia 920 is especially hard to find, with some folks reporting that only a few of these particular models have shipped out to the people who have ordered them. At the moment, neither Nokia nor AT&T has offered any word on specific sales numbers for the Lumia 920.