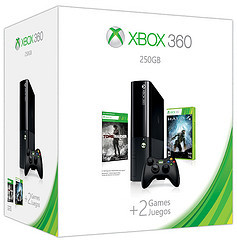 While Microsoft wants people to buy its new Xbox One console, the company still would love to see a lot of its current Xbox 360 units sold during the holiday shopping season. Today, Microsoft revealed the Xbox 360 2013 holiday game and hardware bundles it is offering for those of you who have yet to purchase a console, or want to get one for a friend.

Normally the 4GB-Kinect and the 250 GB Xbox 360 bundles would cost $299.99 and the 250 GB-Kinect bundle would cost $399.99. However, Microsoft has said that starting on Sunday and running through January 4th, 2014, many U.S retailers will cut $50 off those prices. In addition, we suspect that some retailers will cut the price of those bundles even more as we approach the dreaded "Black Friday" sales event on November 29th.