Microsoft's Monday morning Surface event didn't yield many surprises, but the announcement of a new music-mixing cover wasn't revealed in previous leaks of the event.

The Music Cover, a touch cover that works with all Surface tablets except the original Surface RT, allows users to remix songs easily, providing several standard audio-control buttons as well as buttons that can be mapped to specific audio-related tasks. A new app will work in conjunction with Xbox Music to allow users to remix songs, launching automatically when the Music Cover is plugged into a Surface tablet.

Remixes can be exported to MP3, WAV or WMA files through the app, and Microsoft says some remixes shared with the hashtag #RemixProject may be released on an official album. The Music Cover and app will be bundled in the Surface Music Kit, which will be available Oct. 22, though no price has been announced.

In addition to the Surface Music Cover, Microsoft revealed updates to its Touch and Type covers, giving both more accurate input and backlit keys.

Microsoft's Touch Cover 2 features 1,092 touch sensors, a significant improvement over the 80 in the original Touch Cover. The additional sensors allow users to use the cover's entire surface as a gesture pad for input. Despite the improvements, however, the cover is actually 2mm thinner than its predecessor. 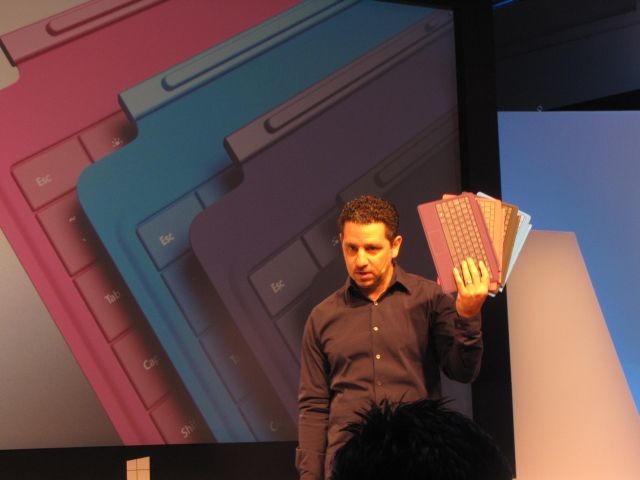 Microsoft's Type Cove 2 will be available in pink, purple, blue and black for $129 each.

The Type Cover 2 received similar improvements, including backlit keys and a thinner frame, which Microsoft said is nearly the same thickness as the first-generation Touch Cover. New purple and pink color options have also been added to go along with blue and black covers.

An optional wireless adapter is available for any of the covers, allowing the keyboards to be used via Bluetooth without being physically connected to the device.

The new covers will all be available alongside the launch of the Surface 2 and Surface Pro 2 on Oct. 22. Both the Type Cover 2 and Touch Cover 2 are compatible with all Surface tablets, with prices remaining consistent with the previous generation's covers. The Touch Cover 2 will retail for $119, while the Type Cover 2 will cost $129; the wireless adapter costs an additional $59, though it won't be available until early next year.

Both the Touch Cover 2 and Type Cover 2 can be pre-ordered from Microsoft's website.