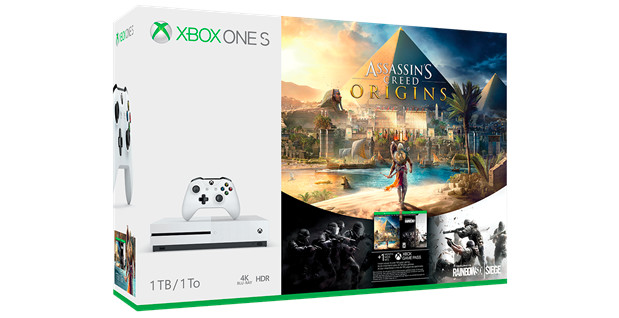 Assassin’s Creed Origins was originally announced back in June at E3 2017. After a four-month wait, the game is finally going to arrive to retail at the end of the month. Those who have yet to pick up a Xbox One console might find interest in the new bundle coming out on October 27.

The 500GB model will retail for €279 in Europe and £229 in the UK, while the 1TB model will be $349 in the US, €349 in Europe, and £299 in the UK. Microsoft has confirmed that the 500GB model will not be available to those in the United States. If the Assassin’s Creed Origins bundle isn't to your liking, you can always take advantage of one of the other bundles available from the Microsoft Store and participating retailers. Those that want a little more power can pre-order the Xbox One X and take advantage of the Enhanced version of Assassin’s Creed Origins.

Microsoft will be holding an Assassin’s Creed Origins launch event at participating Microsoft Stores on October 26. You'll be able to enjoy the game, win exclusive prizes, and also enjoy some food. If you are located in New York, there will a special event at the Microsoft flagship store with Major Nelson and the game's director, Ashraf Ismail. If you cannot make it out, the eventwill be livestreamed on Mixer.