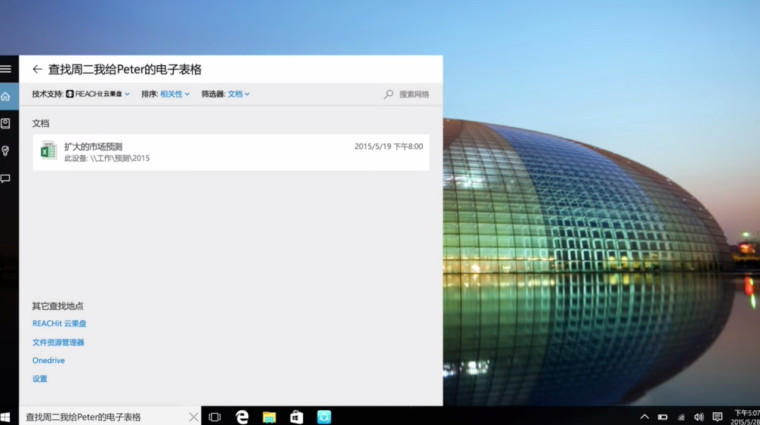 Earlier this week, Lenovo held its first 'Tech World' conference where it showed off several of its upcoming products including REACHit, which adds deep search functionality to Cortana. During the keynote, Satya Nadella joined Lenovo on stage to highlight the feature and also showed an unreleased build of Windows 10.

If you watch the video below, you can see the build shown several times and the watermark is removed, so we do not know which build this is. But, you can clearly see the new Edge icon for the company's upcoming browser which has not made its way into any of the leaked builds or those released to Insiders.

Along with the Edge icon, you can see that the icons are also in black and white on the taskbar. While it's possible that this a custom branch built specifically for this demo, or that this could be some sort of canned demo with a fake taskbar, the black and white icons can be turned on in the latest leaked builds. Also, at the 39-second mark, the build does appear to be from today, unlike the demo that is shown at the 12-second mark that has a date of 4/2 in the system tray.

Not much else is new in this build, at least from what we can see, and this version still has the older File Explorer icon, so it's not quite clear when this build was compiled.

Thanks for the tip Andrew B!