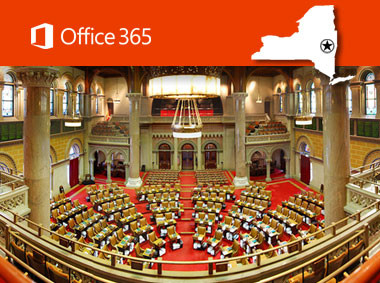 Microsoft has been signing up more and more large businesses and governments to use their Office 365 productivity software service, including the cities of Chicago, Seattle and Kansas City and the state of Texas. Today, Microsoft announced one of their biggest Office 365 government contracts yet, this time with the state of New York.

Microsoft's blog announces that Office 365 will be used by 120,000 government employees in New York by the end of 2013. Microsoft said the government picked Office 365 for several reasons, including its offer of a unified platform for email, documents, calendars, contacts and more. Currently, the state uses 27 different email, word and data processing systems.

New York state agencies will also see their mailbox size increase to 25 GB with the move to Office 365, versus its previous limit of 500 MB, along with the means to access email and files from anywhere securely. The government says that taxpayers in that state will save $3 million per year in license fees, hardware, maintenance, energy, and personnel costs.

Microsoft recently announced that, on average, the uptime for Office 365 for its business and government customers was 99.965 percent in the last four quarters.