The upcoming launch of Microsoft's Surface tablet will mark the company's first ever venture into making its own PC (although Microsoft has certainly made other PC-related hardware such as mice and keyboards). Now it seems that Microsoft might just be working on its own phone handset too. 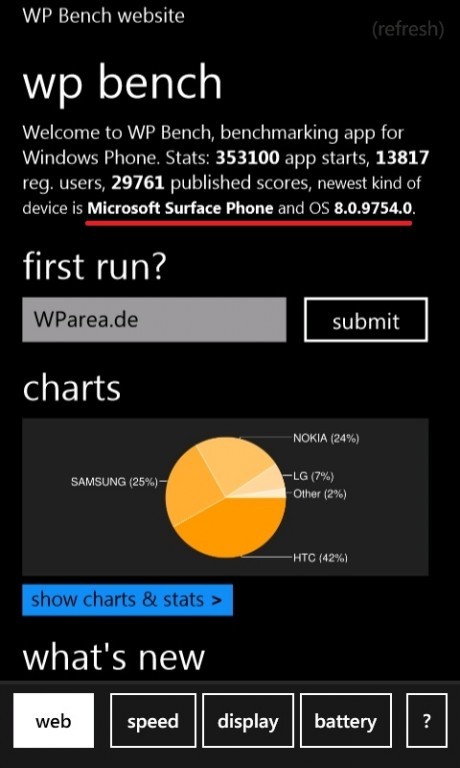 WParea.de claims that the Windows Phone benchmark app WP Bench has detected the use of a device identified as "Microsoft Surface Phone". The software version number is 8.0.9754.0, which is consistent with previous sightings of Windows Phone 8.

Assuming that this isn't some kind of spoof, one might speculate that Microsoft is in the early stages of working on its own smartphone device with the same Surface name as its upcoming Windows 8/RT tablet. But before everyone gets over-excited, bear in mind that it is technically possible to spoof a handset's device ID (although altering the OS version is much more troublesome).

Does this mean that Microsoft is entering into the smartphone hardware business on its own, bypassing other OEMs like Nokia, Samsung and HTC? While at first glance that seems unlikely, most people would not believe Microsoft would have entered the PC hardware market until they announced the Surface tablet.