Zune Music, Microsoft's flagship competitor to iTunes has been available for some time now, depending if you're in the right country. The "right" countries right now are the United States, United Kingdom, France, Italy, Spain and Germany, with the rest of the world either missing out entirely on the marketplace or only receiving small parts of it. 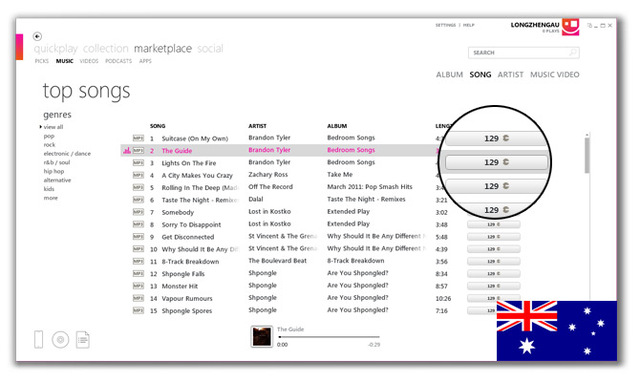 However, Long Zheng of iStartedSomething posted today that Microsoft is quietly testing the music component of the marketplace in Australia right now. It had been rumored before that it might be coming to the country soon, with TechAU reporting that Microsoft had posted to "watch this space" for availability on Facebook, but this looks to be a suggestion it may be soon.

Long reports that if a user has their system locale set to "Australia" and are signed in with an Australian Windows Live ID, they should see the "music" tab under marketplace with a small selection of available songs. According to the post, songs cost 129 Microsoft Points, which is $2.13 AUD right now, and albums are priced at 1299 Points or $21.43 AUD.

It's interesting timing considering that Mango is pinned to be less than two months away from hitting phones, and with Microsoft stating earlier this year that Zune pass will be expanding beyond the US/UK in the near future. It'll be interesting to see what other countries receive the well reviewed service.