Microsoft released the developers preview version of Internet Explorer 11 for Windows 7 earlier today, and with that release comes some new updates for the company's series of modern.IE developers tools and resources. 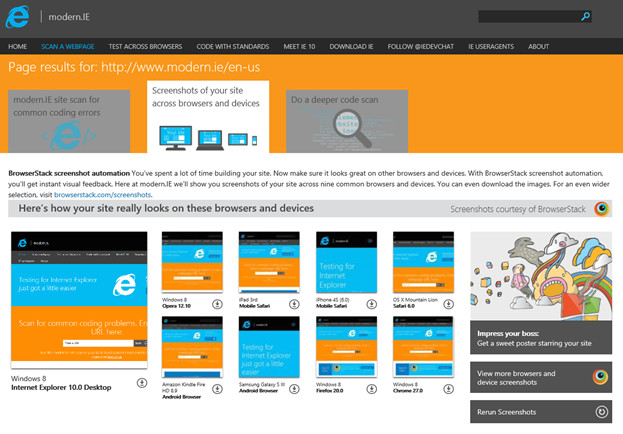 In a new blog post, Microsoft states that it has new virtual machine download files available for developers to test both the new IE11 Developer Preview for Windows 7 as well as IE11 for the Windows 8.1 Public Preview. In addition, modern.IE now has a new screenshot tool for website developers. It's designed so that those creators can view how their websites look across a number of different web browsers, including IE, Android, iOS, Safari and even on the version of IE made for the Xbox 360.

Microsoft has also released a new version of its local scan modern.IE under the Apache 2.0 license which Microsoft says will offer developers "complete confidence in scanning for your intranet, line-of-business web app, authenticated firewall, or super-secret project."

Finally, Microsoft is currently offering 25 percent off the price of the Parallels Desktop 8 for Mac developer software tools. There are only 2,500 redemption keys available for this special price and the offer itself will end on August 19th.