We're used to seeing Xbox One bundles these days; usually, you'll get the console, the controller, and a particular game - maybe even more, depending on the bundle. But Microsoft's latest deal gives the buyer the choice of which game they'd like included with their new Xbox One. 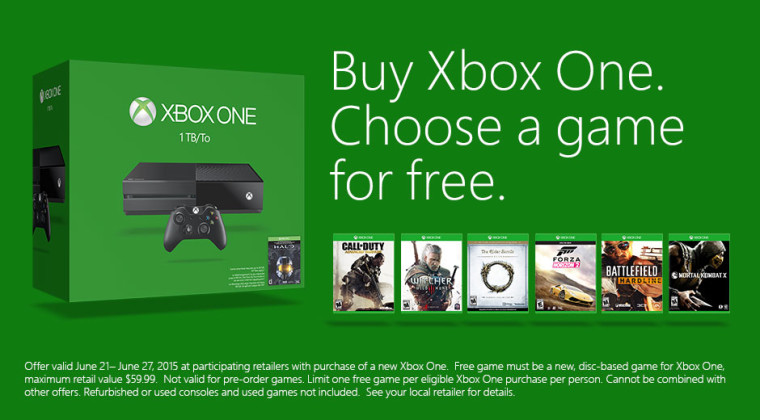 From June 21 to June 27, Microsoft - and other participating retail partners - will give you any game you want free when you buy an Xbox One. If that offer sounds a bit too good to be true, here it is again in Microsoft's own words:

Starting Sunday, June 21 through Saturday, June 27, when you buy any Xbox One, you’ll get to choose any Xbox One game of your choice for free

The offer extends to any and all disc-based Xbox One games with a maximum retail value of $59.99 which are on-sale during the offer period - so that means you can't ask for a game that's still on pre-order at time of purchase.

The 500GB Xbox One is now priced at $349, with the recently-introduced 1TB model (which also includes the new standard wireless controller and Halo: The Master Chief Collection) available for $399.

Along with game streaming to Windows 10, a redesigned user experience, and backward compatibility to play Xbox 360 games on the Xbox One, Microsoft is certainly working hard to make its new console as appealing as possible.